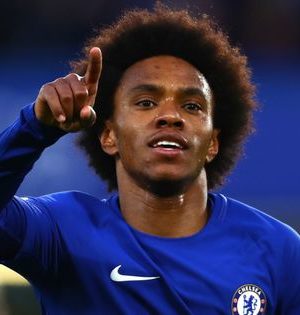 With Anthony Martial looking increasingly likely to leave Manchester United this summer, it comes as little surprise that the Red Devils are being linked with the signing of another winger. According to reports, the Old Trafford club are confident in signing Chelsea winger Willian.

José Mourinho is a big fan of the Brazilian and was linked with his signing last year but nothing came out of that. With Willian looking out-of-favour at Chelsea under Antonio Conte, the rumours linking him to United have been reawakened. According to the Sun, Mourinho is confident United can reach an agreement with his former club to sign the Brazilian international in a £60 million deal.

Willian has blown both hot and cold since joining Chelsea and I firmly believe the Blues will be willing to do business with United. Barcelona have also been linked with the player. According to the reports linking the La Liga champions to Willian, they are ready to let Chelsea have André Gomes as part of a deal to bring Willian to the Camp Nou.

However, Barcelona’s interest in the player appears to me like more of paper talk than anything real. The Catalans don’t need Willian. They have more pressing needs so I doubt they will be making a move for the winger. If you ask me, Manchester United have the best chance of signing Willian this summer. The only problem I foresee here is whether the incoming Chelsea manager, who is expected to be Maurizio Sarri, wants to keep Willian or not.

If the new manager likes the 29-year-old, Chelsea are most likely going to keep him and maybe get rid of Pedro instead, if they want to free up a squad place for another player to be brought in. But again, for £60 million, I doubt Chelsea would reject Manchester United’s offer.