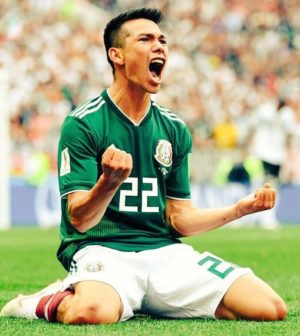 Manchester United still do not have a proper left winger in their team. Anthony Martial is the best they have in that position in my opinion, but manager José Mourinho is seemingly not a fan of the former AS Monaco star. Hence it is not a surprise that the agent of Martial has come out to say his client could be on the way out of Old Trafford this summer.

And it seems Manchester United are also preparing for the exit of the French international. This is because the club are said to be interested in signing highly-rated PSV Eindhoven winger Hirving Lozano. The Mexican star has also been linked with a move to Arsenal and Liverpool.

Lozano scored 19 goals and provided 11 assists for his teammates in the Dutch Eredivisie last season and was one of Mexico’s best players at this summer’s World Cup. United are said to be interested in making a bid of €40 million (£35m) for the player in the coming days.

If this report is true it will delight a lot of Manchester United fans. The Mexican is a versatile player who can play equally on both the left and the right flanks, and be deployed as a false number nine as well. He would certainly be an upgrade on what United currently have to offer, especially down the left wing, which is his primary role. His signing could force Alexis Sánchez to be deployed as a right winger for United, where he used to place for Barcelona. Personally, I think the combination of Sánchez and Lozano down the wings could be very exciting for the Red Devils.

The 22-year-old and Sánchez could easily switch roles in game which would confuse Manchester United’s opponents each week. Alternatively, Lozano could play in place of Alexis Sánchez should Mourinho want to rest the Chilean superstar, or when he is unavailable. Hirving Lozano is a quality winger who offers goalscoring ability from both wings, should any club be successful in luring him away from PSV this summer.

With Arsenal and Liverpool said to be interested, United need to act quickly on a deal if they do not want it hijacked. Liverpool could do with him especially with Sadio Mané likely to be representing Senegal at the African Cup of Nations in January.