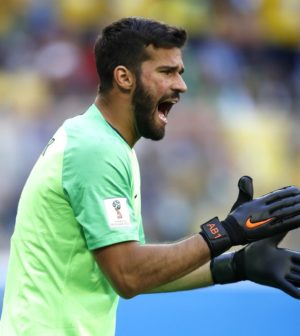 Real Madrid want a new goalkeeper and have been linked with many of them in the last few weeks. It appears they have given up on signing David de Gea from Manchester United and have turned their attentions towards the likes of Atlético Madrid’s Jan Oblak and Chelsea’s Thibaut Courtois.

Courtois is heading into the final 12 months of contract at Stamford Bridge and has so far rejected Chelsea’s offers of a renewal. The Belgium star apparently wants to move to Real Madrid, hence his refusal to put pen to paper over a new deal. Chelsea can be expected to sell him if he continues to reject their offers over the summer.

Now, according to reporter Dharmesh Sheth via the  Daily Star, should Courtois leave, Chelsea are prepared to spend £65 million on AS Roma’s highly-rated Alisson Becker, who himself has been linked with a move to Real Madrid in recent weeks.

Sheth is quoted as saying:

“There are a few scenarios.

“There’s one which would see Courtois stay at Chelsea and the Roma keeper Alisson go to Real Madrid because there’s an interest there.

“If Courtois gets his wish to go to Real Madrid, according to our Sky colleagues Chelsea will then bid £65m for Alisson.

“An alternative to all of this is Leicester City keeper Kasper Schmeichel.

“Interestingly hear we are told both Chelsea and Roma are looking at him because they’re preparing for life without their current No.1s.

“I think there will be some sort of movement for one of these goalkeepers, if not two, if not three. It could yet see Courtois staying put.

“That would put Chelsea in a situation because if Courtois stays, he’s entering the final year of his contract. They’ll lose him for nothing.

“He will be able to talk to foreign clubs over leaving for free in January.”

The signing of the Brazilian, if it happens, could be Maurizio Sarri’s first for Chelsea (assuming he gets the job). Alisson is a great goalkeeper, but for £65 million? Despite the inflation in the market, I still don’t believe he’s worth such a substantial amount. The Blues could be saving a lot of money by moving for Stoke City’s Jack Butland instead. Butland is not far from Alisson in terms of quality in my opinion, and in fact, I believe if he was Brazilian he would cost almost the same amount of money.  But he’s not.

Chelsea have many areas in their team that they need to spend on and splashing out £65m on Alisson would not be not ideal, especially when they can sign someone like Butland for about £40 million, which is a saving of £25 million that could be spent on signing a centre-back or a defensive midfielder.

They can also go for Leicester City’s Kasper Schmeichel. The Dane will cost less than £65m. In fact I believe Chelsea can sign him for about £40 million as well.