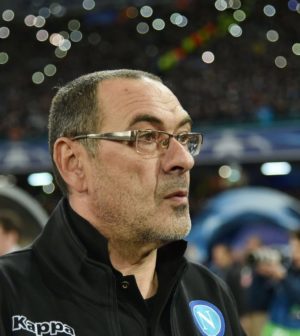 According to a report by Il Corriere dello Sport (via calciomercato.com), Chelsea will today, in a couple of hours, announce Maurizio Sarri as their new manager. According to the report, Roman Abramovich has spoken to Napoli’s chairman, Aurelio De Laurentiis, and they discussed details of the deal. And judging by the report, it seems talks between the two clubs went well as Sarri will officially be announced in a matter of hours.

This is good news for Chelsea fans who must have been worried about the managerial situation. The fans of the Blues will be hoping this report is true and that Sarri can immediately get to work. Chelsea have so far been linked with many players but have not signed a single one of them. But all that could stop once the managerial issue is sorted out. If you believe Tuttosport, Maurizio Sarri will sign a three-year contract with the West London club and will earn about €6 million (£5.3m) per year.

As well as talking to Aurelio De Laurentiis about Sarri, Abramovich is said to have made a big money offer for the services of Manchester City target Jorginho. The Italian was thought to be on his way to the Premier League champions but it appears Chelsea are working hard to hijack the deal. This is good news for both neutrals and Chelsea fans alike. For me, Jorginho would only strengthen Manchester City even further.

Chelsea signing Jorginho may not make them immediate contenders for the title as they still need 2-3 more additions, but it will go a long way in helping them get back into the top four. Jorginho’s signing could make the end of Tiémoué Bakayoko at Chelsea as I doubt the Frenchman will be happy being demoted to the bench.