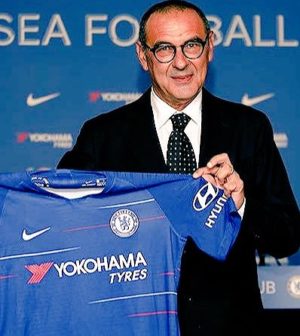 An Italian out, an Italian in, the Blues have confirmed Sarri has signed a three-year contract at Stamford Bridge in what had been one of the most-anticipated events of the summer.

The new manager will have the tough task of keeping a hold of both Eden Hazard and Thibaut Courtois before the start of the 2018-19 Premier League season as both are key Real Madrid targets.

On top of that, Chelsea have only given their new manager four weeks to make changes to his inherited squad as the English FA are slamming the transfer window shut on Thursday 9 August; the day before the new season kicks off.

Chelsea have been quiet in the transfer window so far this summer with Antonio Conte having been expected to be dismissed since the end of last season.  The only question that remains is why the West London club waited so long.

Napoli played some entertaining football under Sarri last season but arguably bottled the Serie A title late on as they had led Juventus up until the final couple of games of the season.

Fans of the Premier League side can expect some entertaining, attacking football next season – not something commonly associated with Italian managers!  His Napoli side scored 251 goals during his three seasons in charge – more than any other Serie A side during that spell.

Chelsea finished fifth last season and therefore missed out on Champions League football.  This could have a minor affect on the players they are able to bring in, but the money floating around the Premier League should give them a great advantage in attracting star players from abroad.

Several Napoli players are immediately being linked with a move to Chelsea.