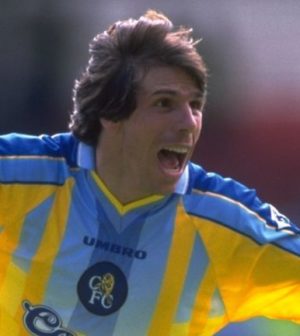 Former Chelsea and Italy striker Gianfrano Zola has been named as the club’s assistant manager to newly-appointed Maurizio Sarri, the club have confirmed.

The West London club announced Sarri as their new manager last Saturday, replacing Antonio Conte after two years in charge of the Blues.

Zola is a legend at the club having played at Stamford Bridge between 1996-2003.  He has had managerial spells at West Ham United, Italy under-16s, Watford and Birmingham City among others.

The appointment makes complete sense in that the Italian knows the club inside out to help his fellow countryman to settle into both England and the club.

Maurizio Sarri joins Chelsea with a reputation for playing exciting, attacking football at his previous job with Napoli where he finished runners-up to Juventus last season having led the league for a long period.

The Blues will be hoping the combination of Sarri and Zola will be able to put together another title challenge after the club finished in a disappointing fifth position last season, missing out on Champions League football.

Two of their toughest tasks could happen over the next three weeks as they try to persuade both Eden Hazard and Thibaut Courtois to stay amid strong interest from Real Madrid.  The transfer window closes on Thursday 9 August.