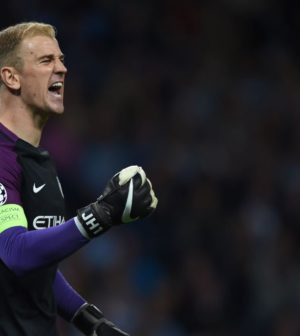 England goalkeeper Joe Hart has been named in the Manchester City squad as part of their pre-season tour of the United States.

The 31-year-old is one of two senior goalkeepers Pep Guardiola is taking with him, along with Claudio Bravo.

First choice shot stopper Ederson is currently on holiday having been part of the Brazil squad at the 2018 World Cup earlier this month.

Joe Hart has spent the past two seasons out on loan at Torino and West Ham United respectively and is now in the final year of his contract with the Premier League champions.  He is widely-expected to be moved on this summer instead of the club taking a risk on losing him for nothing at the end of the season when his contract expires.

City are set to take on Borussia Dortmund at Soldier Field, Chicago on Friday, before facing Liverpool and Bayern Munich in the International Champions Cup next week.

The goalkeeper is joined by 2018 World Cup winner Benjamin Mendy, Leroy Sané, Bernardo Silva and club record signing Riyad Mahrez among a couple of other first team players in a squad that is mostly made up of youngsters.

The full squad is as follows: