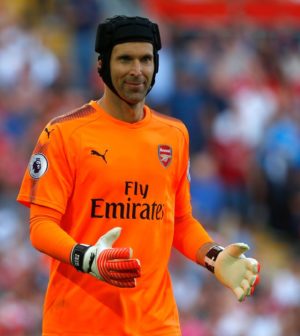 The defending champions had their first competitive game of the season in beating Chelsea 2-0 in the FA Community Shield last weekend in which they looked very impressive.

Pep Guardiola’s side start the season as odds on favourites to win the Premier League again this season with how impressive they were last season.

The two teams for this afternoon’s game at the Emirates are as follows:

Unai Emery has made some interesting decisions in his first Arsenal starting lineup for this afternoon’s game.  Petr Čech remains in goal but that could simply be because of his Premier League experience over new signing Bernd Leno, as he tries to sure up the defence, which includes young left-back Ainsley Maitland-Niles and debutant Sokratis.

Teenager Mattéo Guendouzi starts alongside Granit Xhaka in front of the back four.  The Frenchman is highly-rated whilst Emery has spoken highly of Xhaka over the summer as if he wants to build his team around him.

Pierre-Emerick Aubameyang starts as the striker with Alexandre Lacazette named on the bench, supported by Aaron Ramsey, Mesut Özil and Henrikh Mkhitaryan.

John Stones keeps his place in the starting lineup after an impressive World Cup, and is partnered by January signing Aymeric Laporte as both Nicolás Otamendi and Vincent Kompany are named on the bench.

So to is Kevin De Bruyne among the substitutes this afternoon after helping Belgium to a third-place finish at the World Cup four weeks ago.  He is joined by teenager Phil Foden.