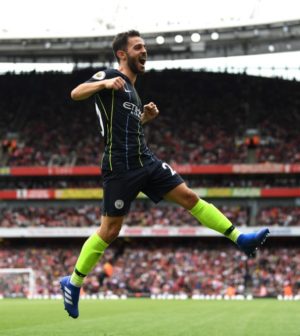 Manchester City started the defence of their Premier League title with a 2-0 victory at Arsenal on Sunday afternoon.

Raheem Sterling and Bernardo Silva scored in either half for Pep Guardiola’s side that were missing a number of stars from the World Cup – Kevin De Bruyne started from the bench whilst David Silva and Nicolás Otamendi were not involved.

Arsenal had a good spell of possession at the end of the first half and start of the second, but poor performances from Mesut Özil and Henrikh Mkhitaryan saw the Gunners very rarely test Ederson.

Petr Čech 7 – Arguably could have done better with Raheem Sterling’s opener but no chance with Manchester City’s second.  Petr Čech made a number of saves in between, including denying Aymeric Laporte from inside the six-yard box and Sergio Agüero one-on-one.

Héctor Bellerín 5 – Raheem Sterling caused a lot of problems when he was cutting inside but Benjamin Mendy got the better of Héctor Bellerín down the wing.  Arsenal’s right-back got forward on occasion to support the few attacks they had.

Shkodran Mustafi 7 – A much better game from the German than we’re used to seeing at Arsenal, limiting Sergio Agüero to just one chance.

Sokratis Pastapapadopulous 7 – Took a yellow card to deny Agüero dribbling the ball into the penalty area in the first half and was disciplined after.  Manchester City’s biggest threats were coming from out wide.

Ainsley Maitland-Niles (34 mins) 4 – Struggled badly up against Riyad Mahrez at left-back before limping off in the first half.

Mattéo Guendouzi 7 – Energetic display from the teenager of his Arsenal debut.  Mattéo Guendouzi wanted to get on the ball and won it back for his side a number of times.  Wasn’t helped out very well at all by Granit Xhaka alongside him in front of the back four.

Granit Xhaka 4 – Manchester City passed the ball around Granit Xhaka with ease. The Swiss international picked up his usual yellow card, early in the second half.  Replaced before he could receive a second.

Aaron Ramsey 4 – Didn’t see much of the ball in the number 10 role and miss-hit Arsenal’s first shot of the season from long range, allowing Ederson to collect the ball rather than save it.

Mesut Özil 4 – Wasted the ball in some good positions in the first half and was largely on the fringe of the game throughout.

Henrikh Mkhitaryan 4 – A quiet afternoon in possession for the Armenian who wasted possession a number of times and was a bit lazy off the ball.

Stephan Lichtsteiner (67 mins) 6 – Replaced the injured Maitland-Niles at left-back and immediately did a better job in closing Mahrez down and cutting off some of the threat.

Lucas Torreira (22 mins) N/A – Made his Premier League debut as a substitute at 0-2 and didn’t see much of the ball.

Ederson 6 – Easy day for the Brazilian goalkeeper whose only save of note came from a powerful drive from Héctor Bellerín straight at him.

Kyle Walker 7 – Got forward down the right and was notably having success in the opening half hour.

John Stones 8 – Comfortable afternoon for the England international as the Manchester City centre midfield and defence denied Arsenal many opportunities at all.

Aymeric Laporte 9 – Made a number of important tackles at the back and was unlucky not to get on the scoresheet when following up a parried free kick in the first half.

Benjamin Mendy 8 – Played as a left winger most of the game and setup two goals.  Wasn’t always careful in possession.  Mesut Özil didn’t cause Benjamin Mendy any problems but Héctor Bellerín did dance around him early in the first half to create a chance for himself.

Fernandinho 6 – Wasn’t the best of defensive shields today as Arsenal did have several counter-attack opportunities in the first half before wasting them in and around the Manchester City penalty area.  Fernandinho had a better game after the break.

Ilkay Gündogan 6 – A quiet game in centre midfield, neither creating much more involved in many tackles.

Riyad Mahrez 7 – Terrorised Ainsley Maitland-Niles in the opening half hour before the young, makeshift left-back went off injured.  Quiet after Stephen Lichtsteiner came on and was then taken off around the hour mark.

Bernardo Silva 6 – Very quiet game in the number 10 role for the first hour as Mattéo Guendouzi picked off a couple of passes in his direction.  Then popped up unmarked in the penalty area to smash home Manchester City’s second.

Raheem Sterling 8 – Very lively game and a fine finish to open the scoring from outside the penalty area.  Forced a fine save out of Petr Čech beforehand.

Sergio Agüero 6 – Linked up well with his attacking teammates but the only real chance Sergio Agüero saw was a one-on-one that he wasted, when squaring to Kevin De Bruyne would have given his teammate a tap in.

Kevin De Bruyne (32 mins) 5 – Introduced when Arsenal were starting to take the game to Manchester City – five minutes later and the visitors had doubled their lead.  Surprisingly didn’t get on the ball much and did pick up a yellow card.

Gabriel Jesus (13 mins) N/A – Late introduction for the Brazilian who didn’t get a chance on goal.

Leroy Sané (3 mins) N/A – Not enough time to do anything of note.