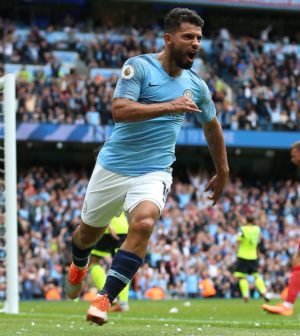 Manchester City made it two convincing wins from two Premier League games with a 6-1 thrashing of Huddersfield Town at the Etihad Stadium this afternoon.

The Terriors held out for the opening 24 minutes before being terrorised by three goals in an 11-minute spell that saw City go in 3-1 up at half-time.

Sergio Agüero scored the first of those with a left-footed lob after collecting an Ederson goal kick.  Gabriel Jesus doubled their lead six minutes later with a first-time effort after Benjamin Mendy’s cross was blocked.  A few minutes later the left-back’s cross was spilled by Ben Hamer for Agüero to tap in from close range.

Huddersfield reduced the deficit before half-time with Jon Stanković netting from close range from a set piece.

Goals from David Silva, Agüero and a Terence Kongolo own goal made it 6-1 – a scoreline that didn’t flatter the hosts in truth.

Ederson 6 – Not much chance with the goal and not a lot else to do in the 90 minutes.  Ederson’s quick thinking set up Sergio Agüero’s opener from a goal kick.

John Stones 8 – Was at fault for the goal by switching off but was good in possession and saw a lot of touches in the Huddersfield half.

Vincet Kompany 8 – Dealt with the long balls and comfortable in possession.

Aymeric Laporte 8 – Manchester City didn’t have much defending to do and their defenders brought the ball forward, laying off to the playmakers to create chances.

Fernandinho 9 – Did his job of winning the ball back for his side and laying it off to teammates to deal with the attacking side of the game.

Bernardo Silva 7 – Not hugely influential and did miss a great opportunity at the end.

İlkay Gündoğan 8 – Calm game in the middle of the park to pick out his teammates time and time again.

David Silva 10 – Ran the show from the middle of the park by creating chance after chance by unlocking the Huddersfield defence and scoring shortly after the break.

Benjamin Mendy 10 – Hung out on the left wing as he didn’t have much defensive work to do and was involved in the second and third goals with his crosses.  Benjamin Mendy found lots of space out wide to put a number of crosses in, setting up Agüero’s hat-trick goal.

Sergio Agüero 10 – Scored the ninth Premier League hat-trick of his career as Sergio Agüero was lethal in and around the six-yard box after scoring a 20-yard lob on his left foot to open the scoring.

Gabriel Jesus 9 – Hardworking display from the Brazilian who scored Manchester City’s second goal to kill the goal on 30 minutes.

Riyad Mahrez (28 mins) N/A – Didn’t see a great deal of possession but did fire a good chance over the bar on the counter attack.

Leroy Sané (16 mins) N/A – Late introduction and it was the German’s effort that was saved before deflecting in off Terence Kongolo for Manchester City’s sixth.

Phil Foden (10 mins) N/A – Another late run out but barely touched the ball.