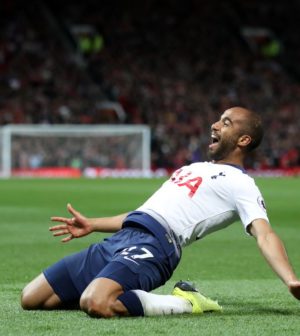 Tottenham Hotspur were emphatic 3-0 winners at Manchester United on Monday night to make it three wins from three to start the 2018-19 Premier League season.

Harry Kane and a Lucas Moura brace in the second half have put José Mourinho’s future at Old Trafford in doubt, particularly with the United boss looking emotional and standing in front of the Stretford End to applaud post-game.

Credit to Mauricio Pochettino’s side who were minimally second best in the opening 45 minutes before two goals in two minutes early in the second half sent them on their way to victory.

David de Gea 5 – The stats didn’t get any better for the Manchester United goalkeeper who only made two saves and conceded three goals.  David de Gea didn’t have much of a chance with either though.

Ander Herrera 5 – Looked out of position in a strange decision from Mourinho to play the Spaniard at right-back.  However, Danny Rose didn’t test Ander Herrera too much as Tottenham predominately attacked down United’s left or through the middle.  The Spaniard wasn’t very good in possession before being replaced early in the second half.

Phil Jones 3 – Terrible performance in his first start of the season. Lucas Moura owned the England international who was fortunate not to concede a penalty in the first half. Was beaten in the air by Harry Kane for Spurs’ opening goal and couldn’t get close to Lucas for the visitors’ second.  Limped off shortly after.

Chris Smalling 4 – Although Harry Kane didn’t have much luck in open play, both Lucas Moura and Dele Alli caused United’s back three lots of problems.

Antonio Valencia 5 – Not tested much defensively in his first appearance of the season but Antonio Valencia wasn’t good at retaining possession and offered nothing going forward.

Fred 5 – Looked lively in the first half but failed to find the target with either effort.  Did create a couple of chances for his teammates.

Nemanja Matic 5 – Not great in possession and didn’t deal well with Tottenham’s central midfield three either.

Paul Pogba 5 – Saw less possession than he did in our first two games and Paul Pogba failed to have a positive influence on this game.

Jesse Lingard 5 – Lively in the first half but with no end product.  Quiet after the break.

Romelu Lukaku 5 – Missed some good opportunities in the first half and saw no supply after the break.

Alexis Sánchez (36 mins) N/A – Saw a bit of the ball down the left after coming on, but aside from a nice chip into Romelu Lukaku’s path, Alexis Sánchez failed to change the game.

Marouane Fellaini (30 mins) N/A – Desperate substitution from Mourinho who was hoping for something different up front but Marouane Fellaini’s appearance failed to produce any good chances.

Hugo Lloris 7 – A good save to deny Romelu Lukaku in the second half but otherwise the Tottenham captain wasn’t called into action too often.

Toby Alderweireld 9 – Excellent defensive performance from the Manchester United summer target as Toby Alderweireld made some important tackles as well as denying Jesse Lingard with a tap in from six yards with an excellent last ditch challenge.

Jan Vertonghen 8 – Tottenham shut up shop in the second half as Romelu Lukaku saw little service after an eventful first half.

Danny Rose 6 – Did gift Lukaku an excellent chance in the first half and was sloppy in possession, but United failed to cause Danny Rose too many problems down the wing.

Mousa Dembélé 9 – Excellent performance in front of the back four, Mousa Dembélé broke up United’s possession and attacks again and again.

Dele Alli 7 – Will wonder how he didn’t get on the scoresheet as Dele Alli failed to shoot nor pick out an unmarked Harry Kane in a great position in the first half.  Missed a one-on-one midway through the second half.  The midfielder picked up some good positions.

Christian Eriksen 8 – Mishit a decent chance in the first half, picked out Lucas Moura with an excellent cross from the right for Tottenham’s second.  Christian Eriksen played well behind the front two.

Lucas Moura 10 – Excellent game from the Brazilian who scored two goals with two fine finishes.  Lucas Moura caused Manchester United’s defence lots of problems with his runs both on and off the ball.

Harry Kane 7 – Opened the scoring with a good header across goal.  Helped set up Spurs’ third.  Harry Kane didn’t see many chances or touches in open play himself.

Ben Davies (9 mins) N/A – Gave Tottenham more energy in defence in the final 10 minutes as Manchester United put the visitors under pressure as they looked to get back in the game.