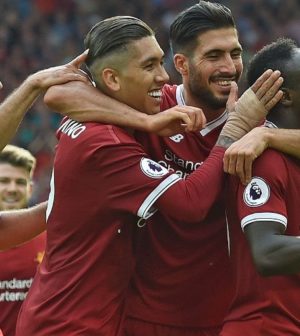 The Premier League is three games into the 2018-19 season and there have already been some surprises. It’s early days yet but we’ve already seen Manchester United lose at Brighton & Hove Albion and at home to Tottenham Hotspur, Watford take a maximum nine points from their games so far, and newly-promoted Wolverhampton Wanderers take a point from Manchester City.  Over the coming weeks and months we will start to see the table take shape as title contenders move to the front of the pack, and others get left behind.

There are so many important questions that already need to be answered – will José Mourinho remain at United much longer?  Can Liverpool or Spurs maintain a serious title challenge?  And who’s going down this season, among others. If you love the Premier League, but have trouble keeping up with the latest league news, look no further, we’ve got you covered.

Liverpool have taken maximum points so far, with victories over West Ham United, Crystal Palace and Brighton, without conceding a single goal. Their 2-0 win against the Eagles had many talking about Liverpool’s shot at the title. The press was hounding Jürgen Klopp, asking about what the German coach thinks about his side’s chances. Once a professional player himself, when asked about winning the Premier League title this season, Klopp says he “Couldn’t care less” about the talk surrounding Liverpool.

While Klopp dismissed the talk about taking home the trophy for the first time in the Premier League era, Liverpool are one of only four teams to boast a perfect record after three games. It is no wonder that so many are looking to Liverpool as a possible early front runner.

Jürgen Klopp doesn’t know how well the team will perform in the future, but he is clear about his strategy moving forward. He believes that Liverpool, “Need(s) to be ugly to play, difficult to play and nobody should be happy when they go to Anfield”. These are strong words. So while the Reds boss isn’t saying that they will win the title, he certainly seems like he is going to make sure his team has the best chance to do it.

The Premier League has been growing in popularity every year since it started. There are millions of viewers who gather around their television every year. The more involved the fandom is, the more money gets pumped into the scene. One way many are profiting off of their passion and knowledge of the game is through sports betting.

With over 1.5 million watching the Premier League in the UK alone, you can be sure that there is a lot of stiff competition out there. That is why it is a good idea to look into some Premier League betting tips to help you turn all of that passion into profits.

It’s essential to go in knowing the odds on both teams before placing a cent and it’s always a good idea to know how most of the top teams in the league are doing in general to put things in perspective for your favourite team. This does range somewhat from bookie to bookie but you can always just look at this as a margin or error; a good idea of what the odds being correct are, in essence.

Know, for example, that Manchester United is currently sitting on 60/1 on one reputable site, and 80/1 at another, with all other sites falling between the two.  You can tell that the fluctuation between bookmakers isn’t that huge and that this is a fairly accurate representation of their odds of them winning. Liverpool, on the other hand, are far more uncertain right now with odds ranging from 14/5 to 11/4. There also tends to be much less fluctuation with teams that are less likely to win. Fulham’s 1000/1 odds are consistent throughout the board.

There is virtually a whole season of Premier League action left to play. The season finishes on 19 May 2019. It being this early in the season, it is impossible to say for sure what the future holds. Will Liverpool take the title? Though they have performed strong early, they still have a lot of great teams to play. The only thing we know for sure, is there is certain to be many more entertaining games to enjoy as this season unfolds.