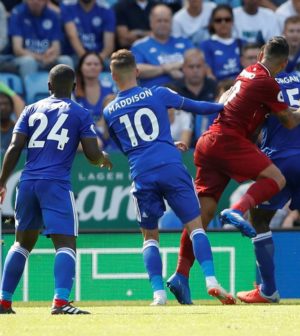 Liverpool made it four wins from four to start the 2018-19 Premier League season as they held on for a 2-1 victory at Leicester City in Saturday’s lunchtime kickoff.

Jürgen Klopp’s side took the lead inside 10 minutes when Harry Maguire’s attempt to cut out Andy Robertson’s cross fell into the path of Sadio Mané who finished well for his fourth goal of the season.  Roberto Firmino’s second before half-time appeared to put the game out of sight.

However, Leicester dominated the possession in the second half and were gifted a goal just after the hour when Alisson gifted possession to Kelechi Iheanacho inside the penalty area who duly set up Rachid Ghezzal to tap in from close range.  The Brazilian goalkeeper wasn’t greatly tested after.

Alisson 5 – The Brazilian goalkeeper wasn’t greatly tested and was at fault for conceding Liverpool’s first goal of the season.  I’ve seen milk turn quicker than what Alisson tried to pull off in front of Kelechi Iheanacho.

Joe Gomez 8 – Fantastic block to deny James Maddison from close range early in the second half.  Joe Gomrez was solid at centre-back today as Alisson was well-protected.

Virgil van Dijk 8 – Took a yellow card for a foul on James Maddison just outside the penalty area but otherwise Virgil van Dijk was comfortable against Demarai Gray and Kelechi Iheadnacho.  Deserved a clean sheet but let down his goalkeeper.

James Milner 6 – The Liverpool midfielder helped in keeping the ball away from James Maddison, and though the Leicester playmaker didn’t see a huge number of touches of the ball he did look dangerous and sometimes free when he was on the ball.

Georginio Wijnaldum 5 – Didn’t see much of the ball and when he did he didn’t do much with it.  Georginio Widjnaldum wasn’t much of a factor in attack or defence for Liverpool today.

Mohamed Salah 6 – Missed a sitter in the opening four minutes but otherwise Mohamed Salah was kept quiet by Ben Chilwell before he was replaced by Xherdan Xhaqiri for the final 20 minutes.

Roberto Firmino 7 – Netted with a free header from a corner to double Liverpool’s lead just before half-time.  The Brazilian had missed a good opportunity in the opening few minutes.  Roberto Firmino was decent in the link up play in Liverpool’s attack but Kasper Schmeichel wasn’t greatly busy in the second half.

Sadio Mané 8 – Finish finish to open the scoring in what was Sadio Mané’s only effort of the game before a later header off target.  Was expecting more from the winger down the left against the poor Ricardo Pereira but still a good performance from the Senegalese who was decent when in possession.

Xherdan Shaqiri (20 mins) N/A – Interesting swap for Mohamed Salah as Liverpool were on the backfoot but it worked out in the end.  Xherdan Shaqiri had a couple of runs around the penalty area but nothing significant.

Naby Keïta (20 mins) N/A – Brought on for his energy in midfield to help Liverpool hold onto their 2-1 lead.

Joël Matip (2 mins) N/A – Defensive change and Klopp wanted another tall defender to help out with the late long balls and set pieces.