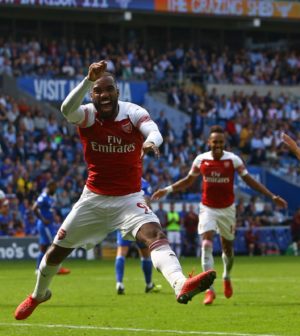 Arsenal made it back-to-back wins in the Premier League to move into the top half of the table before the international break with a 3-2 win at Cardiff City this afternoon.

The Gunners were pegged back twice before Alexandre Lacazette’s goal in the final 10 minutes left too little time on the clock for the Welsh side to equalise.

Shkodran Mustafi and Pierre-Emerick Aubameyang had twice given Unai Emery’s side the lead before shipping an equaliser to Neil Warnock’s side, who remain with two points from their first four games of the 2018-19 season.

Petr Čech 6 – Not given much of a chance with either of Cardiff’s goals which were their only real threats throughout the 90 minutes.

Héctor Bellerín 7 – Adequate defensive performance up against Junior Hoillet.  The Canadian forward looked best when he was cutting inside to pick up possession but didn’t find the target with any of his three efforts.

Shkodran Mustafi 8 – Cracking header to give Arsenal an early lead.  Shkodran Mustafi made a number of clearances but Arsenal fans will be disappointed that their side conceded two goals against a side who hadn’t scored in any of their first three games prior to today.

Sokratis Papastathopoulos 7 – Danny Ward headed home from a flick-on from a corner but neither he nor Bobby Reid were very threatening in open play as the Arsenal defence were pretty decent in that area of the game.

Nacho Monreal 7 – Will be disappointed with Victor Camarasa’s equaliser in first-half stoppage time but otherwise the Spaniard was fine.  Even tested Neil Etheridge with two efforts on goal.

Mattéo Guendouzi 7 – The teenager had another decent performance for Arsenal today as the hosts didn’t create anything through the middle in open play.  Mattéo Guendouzi was fine in possession too.

Granit Xhaka 7 – Decent performance in possession, creating a couple of chances from set pieces and open play, including delivering the corner from which Arsenal scored the opener.

Mesut Özil 5 – Quiet game down the right from Mesut Özil whose time in the Arsenal starting lineup must be under great threat under Unai Emery having yet to perform in four Premier League games now.

Aaron Ramsey 8 – Fine game in centre midfield as Aaron Ramsey worked well with the ball, creating a number of chances and seeing an effort denied by the Cardiff goalkeeper in stoppage time.

Pierre-Emerick Aubameyang 7 – Nice strike to give Arsenal a 2-1 lead early in the second half but otherwise Pierre-Emericky Aubameyang wasn’t a big factor in this game.  The Gabon forward failed to utilise his pace to cause the Cardiff defence problems and scored with his only effort on target.

Alexandre Lacazette 9 – A good decision from Emery to start Alexandre Lacazette up front for the first time today as the French striker rewarded his manager with the winning goal.  The striker had earlier set up Arsenal’s second goal.

Lucas Torreira (22 mins) N/A – Assisted the winning goal and was very tidy in possession after coming on for Mattéo Guendouzi moments before Cardiff made it 2-2.

Danny Welbeck (8 mins) N/A – A late run out for the forward who was involved in a decent counter-attack at the very end of the game.

Henrikh Mkhitaryan (3 mins) N/A – Unai Emery didn’t make a defensive change when hanging on at 3-2 very late on as the Armenian attacking midfielder entered the field.