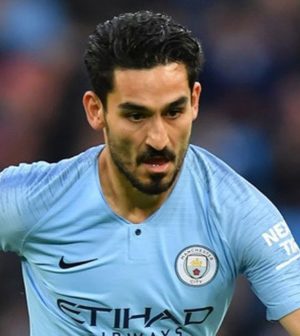 Manchester City have suffered an injury blow to Ilkay Gundogan ahead of Sunday’s Premier League clash with Liverpool, reports the Daily Star.

Pep Guardiola could be without the midfielder after he picked up a muscle problem and had to be substituted in the 68th minute. After the game, the City boss said: “Gundogan has a problem with his muscle, I don’t know his injury. We’ll check it (Wednesday).”

Gundogan joined the Sky Blues from Borussia Dortmund in 2016 and has gone on to make 74 appearances in all competitions, scoring and creating 23 goals. He’s won one Premier League title and one League Cup at City but has struggled with injury problems in his two years at the Etihad Stadium – rupturing his cruciate ligament in his debut season.

Kevin De Bruyne is already sidelined, limiting City’s options in the middle of the park ahead of an important league meeting, so Guardiola might have to consider Fernandinho/David Silva/Bernardo Silva as a makeshift trio – John Stones has played in midfield this season too.

City are top of the Premier League table after seven games and face second-placed Liverpool who are behind the Sky Blues only on goal difference – 19 points. The Reds have home advantage ahead of the meeting and will fancy their chances given City’s injury problems.