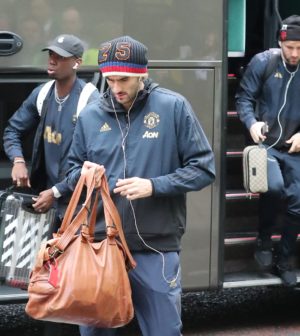 Manchester United have today flown out to Turin ahead of taking on Juventus in the Champions League on Wednesday night.

Victory for the Italian side would see them win the group with two games to spare, whilst we currently sit in second place above both Valencia and Young Boys.

Captain Antonio Valencia and Marouane Fellaini have both recovered from injuries as they were on board today’s flight bound for Italy.

Fellaini has been out of action since October after picking up a groin injury whilst away with the Belgium national team. He returned to training this morning and was spotted at Manchester airport as part of the squad this afternoon.

Ashley Young started at right-back in Saturday’s 2-1 win over Bournemouth after Antonio Valencia picked up a minor injury in training last week. However, the Ecuadorian appears to be available again as he was part of the 23-man squad headed to the Allianz Stadium.

However, there was no Romelu Lukaku among teh squad as the Belgian striker continues to remain sidelined with an injury that saw him miss this past weekend’s game at the Vitality Stadium.

Our 23-man squad that left for Turin today, according to the Manchester Evening News is as follows: