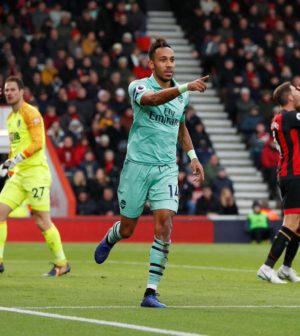 Arsenal moved to within one point of Chelsea and the top four with a hard-earned 2-1 victory at Bournemouth this afternoon.

Jefferson Lerma turned the ball into his own net before Joshua King produced a fine finish with the last touch of the first half.

Unai Emery’s side won from a half-time draw position once again this season when Pierre-Emerick Aubameyang tapped in from close range midway through the second half. Bernd Leno’s goal was well-protected for the majority of the game.

Bernd Leno 6 – Didn’t have a chance with Joshua King’s equaliser and didn’t have a lot else to do other than a catch a couple of crosses all game.

Héctor Bellerín 8 – Offered width down the right wing when bombing forward. Ryan Fraser played down the left wing in the first half and was kept quiet by Héctor Bellerín.

Shkodran Mustafi 8 – Good in the air as the Arsenal back three were largely in control of the Bournemouth attack.

Sokratis Papastathopoulos 8 – Joshua King and David Brooks were the only players who caused the Arsenal defence any problems as Callum Wilson and Ryan Fraser were silenced. Made an important block on a Junior Stanislas cross in the final five minutes to deny Callum Wilson a tap in.

Rob Holding 7 – Loose in possession but performed well defensively. Did enough to put Junior Slanislas off from close range in the final 10 minutes.

Sead Kolašinac 6 – Provided the powerful cross that Jefferson Lerma diverted into his own net to give Arsenal the lead in the first half and then the cross for Pierre-Emerick Aubameyang to restore the lead midway through the second half. David Brooks caused the Bosnian defenders some problem and was unlucky to have a goal disallowed at 0-0.

Lucas Torreira 7 – Looked keen to get on the scoresheet in the first half. Lucas Torreira struck the post early on but otherwise didn’t test Asmir Begović. Was influential in the middle of the park, winning possession and starting attacks.

Granit Xhaka 8 – Won possession back a lot and linked up well with the attack in the final third.

Henrikh Mkhitaryan 7 – A lively game from the Armenian who started out on the right wing but drifted inside a lot. Henrikh Mkhitaryan created a few chances but only tested the goalkeeper once with a number of efforts on goal. Missed a good opportunity to put the game away only two minutes after Aubameyang had restored Arsenal’s lead.

Pierre-Emerick Aubameyang 6 – Struggled to get into the game for large parts playing as the striker. Has been more effective when playing out wide in recent weeks. Was on hand to tap Arsenal back in front midway through the second half with his first effort on target.

Alex Iwobi 6 – Showed a couple of good touches down the left wing but ultimately there was little end product from Alex Iwobi.

Mattéo Guendouzi (12 mins) N/A – Replaced Lucas Torreira to offer energy in front of the back four for the final 12 minutes as Arsenal looked to see out the victory.

Aaron Ramsey (10 mins) N/A – Defensive switch for Alex Iwobi as Arsenal found themselves hanging on a little in the final 10 minutes.