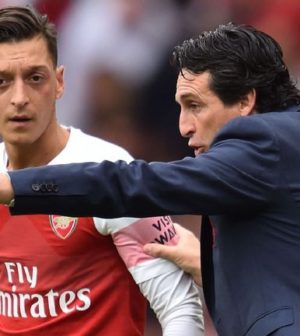 Arsenal will be without playmaker Mesut Özil for the North London derby against Tottenham Hotspur this afternoon.

The former-German international misses out with a back spasm picked up in training, the club have confirmed.

Özil has started 10 of the Gunners’ 13 Premier League matches under Unai Emery this season, scoring three goals and assisting one.

The club confirmed the attacking midfielder’s injury moments ago:

⚠️ We're without @MesutOzil1088 today – he misses #ARSTOT after suffering a back spasm in training pic.twitter.com/8PajoF1tYm

Mesut Özil was an unused substitute in Arsenal’s 2-1 win at Bournemouth last weekend with the manager explaining after the game that the 30-year-old did not suit his side’s tactics employed at the Vitality Stadium.

Victory for Arsenal in the North London derby this afternoon would move them ahead of their rivals on goal difference and into the UEFA Champions League places.

The Gunners are fielding Lucas Torreira and Granit Xhaka in central midfield with Henrikh Mkhitaryan, Pierre-Emerick Aubameyang and Alex Iwobi in attack in a 3-4-3 formation deployed by the Spanish coach.

Emery is able to welcome back Alexandre Lacazette from injury with the French striker named among the substitutes.