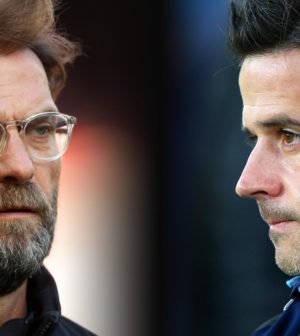 Liverpool will be looking to move back within two points of Premier League leaders Manchester City with three points in the Merseyside derby this afternoon.

Jürgen Klopp’s side are coming off the back of a UEFA Champions League defeat at Paris Saint-Germain on Wednesday night whilst Everton weren’t in European action midweek.

The Toffees have lost just one of their past seven Premier League matches, winning five. However, their only win away from home during this run was at 10 man Leicester City.

Xherdan Shaqiri is making only his fifth Premier League start for the Reds. The Swiss international already has two goals and two assists this season and will be the more attack-minded of Liverpool’s three central midfielders.

Joe Gomez continues alongside Virgil van Dijk with Joël Matip only on the bench and Dejan Lovren sidelined. Youngster Divock Origi is also among the substitutes having not appeared in the Premier League so far this season.

No surprises named by Marco Silva who sticks with the same XI that beat Cardiff City 1-0 at Goodison Park last weekend.

Brazilian Richarlison will start up front, supported by the in-form Gylfi Sigurðsson in the number 10 role. Bernard has looked good down the left wing in recent weeks whilst Silva will be hoping Theo Walcott’s pace down the right can expose any space left behind by Andrew Robertson who loves to bomb forward from left-back.