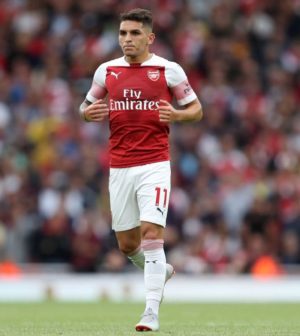 Arsenal came from behind in the second half to pull off a stunning and memorable 4-2 victory in the North London derby at the Emirates this afternoon.

Unai Emery’s side had taken the lead from the penalty spot after 10 minutes following Jan Vertonghen’s handball. Pierre-Emerick Aubameyang’s goal was deserved in an opening 20-minute spell that Arsenal dominated and took to their rivals.

However, Tottenham turned the game around on the half hour mark. First, Eric Dier headed home at the near post from a Christian Eriksen free kick and four minutes later Harry Kane converted a penalty after Rob Holding carelessly too Heung–min Son down inside the box.

Aaron Ramsey and Alexandre Lacazette were introduced at the start of the second half. The Welsh international teed up Aubameyang for a stunning second 10 minutes into the second half. Ramsey then won the ball back in Tottenham’s half to play in Lacazette to give Arsenal the lead on 74 minutes with help of a deflection off Eric Dier.

Bernd Leno 5 – Could have done much better with Tottenham’s equaliser from Eric Dier’s header. Dived the opposite direction to Harry Kane’s penalty but made an excellent save from the England striker’s free kick early in the second half.

Héctor Bellerín 8 – Offered width down the right wing in the opening 20 minutes as Arsenal took the game to their North London rivals. However, Héctor Bellerín didn’t get many crosses in when the opportunities presented themselves. Was careless with one pass in particular midway through the second half that gifted Heung-min Son a sight on goal from 25 yards. Kept Christian Eriksen quiet in open play.

Rob Holding 7 – Careless challenge on Son to concede the penalty only 40 seconds after Arsenal had restarted the game. Otherwise Rob Holding was pretty solid and saw an effort on goal of his own blocked.

Shkodran Mustafi 8 – Good game from the German centre-back who broke up a lot of Tottenham possession in and around his own penalty area. Limped off in the final 20 minutes though.

Sokratis Papastathopoulos 8 – Harry Kane’s only efforts on target came from a penalty and direct free kick as the Spurs striker was kept in check by Arsenal’s back three.

Sead Kolašinac 7 – Offered width down the left and put in a few crosses from his wing-back role.

Lucas Torreira 9 – A man of the match performance from Lucas Torreira who was a terrier in midfield today. Dele Alli saw the ball in very few threatening positions as the Arsenal central midfield kept the Tottenham midfield under control. Drilled home Arsenal’s fourth in the final 15 minutes to kill the game off after getting past Eric Dier.

Henrikh Mkhitaryan 6 – Looked lively down the right in the opening 20 minutes but was replaced at half-time.

Pierre-Emerick Aubameyang 8 – Didn’t see too much of the ball but converted the penalty to open the score and then scored a stunning first-time equaliser from 20 yards in the second half.

Alex Iwobi 5 – Got in some good positions inside the penalty area in the opening 20 minutes but delayed on the ball twice to prevent him getting shots in on goal from good positions.

Alexandre Lacazette (45 mins) 7 – Made some good runs pulling off down the right wing and winning a couple of corners. Scored Arsenal’s third to give them the lead they never looked back on, with help of a deflection off Eric Dier.

Aaron Ramsey (45 mins) 8 – Supersub as Aaron Ramsey set up Arsenal’s first two goals in the second half, the second by winning possession in Tottenham’s half.

Mattéo Guendouzi (21 mins) N/A – Replaced the injury Shokdran Mustafi as Arsenal had to end with a back four. Tottenham didn’t see a sight on goal after.

Hugo Lloris 4 – May be disappointed with Arsenal’s third and fourth goals but they both went into the far corner in defence of the French goalkeeper.

Serge Aurier 4 – Alex Iwobi had a lot of success versus the former Paris Saint-Germain right-back early on. Serge Aurier is known for his better attacking than defending ability but offered little going forward at the Emirates today.

Juan Foyth 4 – Brave, excellent header midway through the second half to deny Sead Kolašinac a tap in. Otherwise struggled against both Pierre-Emerick Aubameyang and Alexandre Lacazette in his first North London derby.

Jan Vertonghen 2 – Bizarre handball to gift Arsenal a penalty to open the score. Tottenham’s defence particularly struggled with the Arsenal attack in the second half. Sent off 5 minutes from time with a cynical foul on Aubameyang. Looked disinterested for a lot of the game.

Ben Davies 4 – Arsenal’s fourth came from down Ben Davies’ side and Henrikh Mkhitaryan and Alexandre Lacazette both had success down that side. Replaced in the final 10 minutes by Danny Rose.

Eric Dier 5 – Good run from the set piece to head Tottenham’s equaliser but was notably weak in his challenge on Torreira which led to Arsenal’s fourth. The Spurs midfield failed to deal with Aaron Ramsey and the Arsenal attack after the break.

Moussa Sissoko 4 – Barely saw any possession and barely won the ball back for his side.

Christian Eriksen 6 – Some excellent set piece deliveries but not a huge factor in open play.

Dele Alli 5 – Made an important goalline clearance in the second half but offered nothing for the visitors going forward.

Heung-min Son 7 – Won Tottenham’s penalty and drew a couple of saves out of Bernd Leno himself as one of Spurs’ only attacking players who showed up today.

Harry Kane 5 – Converted his penalty and tested Bernd Leno from a direct free kick but otherwise Harry Kane barely saw a touch of the ball.

Lucas Moura (13 mins) N/A – Headed wide from a corner but Lucas Moura was introduced too late to make a difference for Mauricio Pochettino’s side.

Harry Winks (13 mins) N/A – Barely saw any of the ball as Arsenal continued to dominate possession and territory even after Tottenham made their attacking changes late on.

Danny Rose (10 mins) N/A – Left-back came on for a left-back when trailing 2-4. I guess the one positive you can argue is that the visitors didn’t concede again after Danny Rose came on.