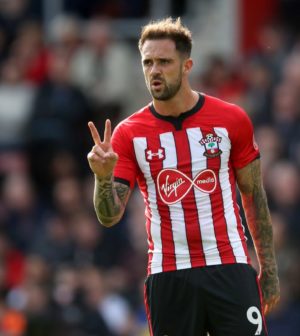 Arsenal came from behind twice but ended up lose 3-2 at Southampton this afternoon.

Danny Ings scored two headers in the first half, either side of Henrikh Mkhitaryan’s first equaliser.

The Gunners were missing their first choice centre-back trio and it was noticeable as they really struggled to deal with crosses into the box at St Mary’s today.

Mkhitaryan scored a second equaliser in the opening 10 minutes of the restart but substitute Charlie Austin scored his fifth goal in as many appearances with six minutes left to pick up Southampton’s second win of the season.

Bernd Leno 4 – Little chance with either of Southampton’s first two goals but at fault for Charlie Austin’s winner. Forced into making a few saves, mostly from long range.

Laurent Koscielny 6 – Looked rusty at times as expected in his Premier League appearance of the season. Poor positioning for Southampton’s opener. Made an important interception on the hour to deny the home side for taking the lead for the third time.

Granit Xhaka 6 – Still saw a lot of the ball despite dropping into the middle of the back three. Did struggle to deal with crosses but no one ran in behind Granit Xhaka.

Héctor Bellerín 5 – Didn’t get close enough to Matt Targett to prevent the cross coming in for Danny Ings’ first goal. Went off injured at half-time.

Mattéo Guendouzi 7 – All three of Southampton’s goals came from crosses. Mattéo Guendouzi was fine in possession in front of the defence. Poor crosses into the box from the young French mifielder.

Lucas Torreira 8 –Excellent battling performance in the centre of the park to help start attacks for the Gunners.

Nacho Monreal 6 – Excellent cross for Arsenal’s first goal but out of position for Southampton’s late winner.

Henrikh Mkhitaryan 8 – Great header for Arsenal’s first equaliser and then aided by a deflection for his second. Henrikh Mkhitaryan was tidy in possession for the away side and even picked off the odd Southampton pass too.

Alex Iwobi 5 –Nice pass that led to Arsenal’s first goal. Alex Iwobi showed the odd nice touch in the Southampton half but was poor with his decision-making in and around the penalty area.

Alexandre Lacazette (45 mins) 5 – Made some good runs off the ball but ultimately saw little of it. Did not fire in a single shot on target during the second half.

Mesut Özil (22 mins) N/A – Brought on at 2-2 but saw little of the ball and didn’t create anything of note.

Ainsley Maitland-Niles (18 mins) N/A – Late change defensively but did nothing of note.