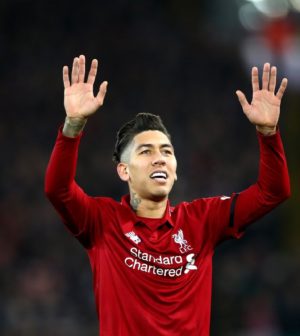 Liverpool made it nine consecutive Premier League wins and moved nine points ahead of Manchester City, who play tomorrow, by thrashing Arsenal at Anfield this evening.

The visitors took the lead inside 10 minutes through Ainsley Maitland-Niles before Roberto Firmino quickly responded with a brace.

A fine goal from Sadio Mané and a Mohamed Salah penalty gave Liverpool a 4-1 half-time lead before Roberto Firmino completed his hat-trick from the spot in the second half.

Allison 6 – Didn’t have a chance with Ainsley Maitland-Niles’ tap in. Didn’t have much else to do all game.

Virgil van Dijk 7 – The Liverpool defence won’t care about conceding their eighth goal of the season with today’s result. Virgil van Dijk didn’t have a lot to do defensively.

Andrew Robertson 7 – Played in a left wing role for the most of the first half as Liverpool bombed forward. Picked up a yellow card before half-time.

Fabinho 8 – The midfield trio had no problem dealing with Arsenal’s attempted attacks today after the opening goal.

Georginio Wijnaldum 7 – Feeding the ball onto the front three was the order of the day for Liverpool’s midfield.

Xherdan Shaqiri 7 – Tidy in possession and only had one effort on goal – that was from 25 yards too. Xherdan Shaqiri may be disappointed not to have seen more chances but I don’t think he’ll mind given the result.

Mohamed Salah 9 – Excellent first-time assist for Sadio Mané ‘s goal and then won and converted the penalty from which gave Liverpool a 4-1 half-time lead. Arsenal failed to deal with Liverpool’s front three all day.

Roberto Firmino 10 – On-hand to tap home Liverpool’s equaliser after some poor Arsenal defending for his first Premier League goal at Anfield this season. Two minutes he had his second by jinking in and out of the Arsenal defence before rolling into the bottom corner. Completed his hat-trick from the penalty spot.

Sadio Mané 9 – Excellent running off the ball, either from out wide or in the middle of the front three. Sadio Mané got the goal he deserved in the first half, controlling a high bouncing ball with a fine first-time finish.

Jordan Henderson (30 mins) N/A – Replaced Sadio Mané but didn’t see a whole lot of the ball as Liverpool took their foot off the gas in the final half hour.

Adam Lallana (14 mins) N/A – Saw little of the ball and did nothing of note.

Bernd Leno 3 – Didn’t have much chance with any of Liverpool’s goals. Good save to deny Fabinho just after the hour.

Shkodran Mustafi 1 – Hopeless attempt at a tackle as Roberto Firmino strolled past Shkodran Mustafi on his way to giving Liverpool a 2-1 lead. The German centre-back was lazy in the third goal too. Hopeless first half and replaced at the break.

Sokratis Papastathopoulos 2 – Didn’t get close with his attempted tackle on Firmino for Liverpool’s second and got caught out by the diagonal ball for Liverpool’s third. Excellent tackle to deny Sadio Mané a one-on-one inside the opening three minutes of the second half.

Stephan Lichtsteiner 2 – Caught out by Mohamed Salah’s run to get onto Andrew Robertson’s long ball for Liverpool’s third.

Ainsley Maitland-Niles 4 – Found space at the back post to give Arsenal an early lead against the run of play. Spent most of the game pinned back in his own half though.

Lucas Torreira 3 – Conceded possession that led to Liverpool’s equaliser. The Uruguayan and his teammates were overrun in midfield today.

Granit Xhaka 3 – Picked up a yellow card in the first half but managed to complete the full 90 minutes. Liverpool ran rings around Granit Xhaka and co.

Sead Kolašinac 1 – Stupid decision to foul Mohamed Salah from behind to concede the penalty in first half stoppage time. Barged Dejan Lovren over to conceded his second spot kick of the game.

Aaron Ramsey 3– Some decent runs off the ball in the final third but couldn’t get anything right in front of Liverpool’s goal.

Pierre-Emerick Aubameyang 3 – On the fringes of the game as Arsenal had no supply to their sriker. Replaced by Alexandre Lacazette midway through the second half.

Alex Iwobi 5 – Won the ball back before picking out Maitland-Niles for Arsenal’s opener. Hardworking effort from Alex Iwobi in midfield but it was Liverpool that saw most of the ball and territory.

Mattéo Guendouzi (11 mins) N/A – Came on to watch Liverpool pass the ball around in front of him.