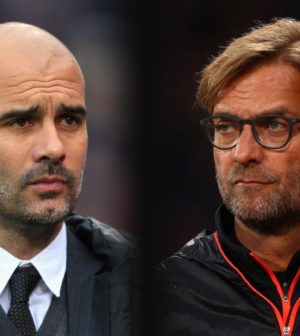 Liverpool take a seven-point lead at the top of the Premier League to Manchester City this evening in a game that many expect them to go on and win the title if they avoid defeat at the Etihad.

Pep Guardiola’s side lost two of their three games over Christmas to help the Reds open up a large lead at the top of the table.

Anything less than three points from the Citizens this evening and CSAR too believe that the title race will be over for another season.

The two teams for this evening’s crucial game are as follows:

Danilo comes in for Kyle Walker at right-back whilst Aymeric Laporte shifts across to the left where he will come up against the in-form Mohamed Salah.

Sergio Agüero continues up front, but saw little service in the 3-1 victory over Southampton at the weekend.

Jürgen Klopp opts to go with James Milner in his central midfield three which sees both Fabinho and Naby Keïta named among the substitutes.

The front three will be looking to get the better of a Manchester City defence that shipped three goals at home to Crystal Palace over Christmas.