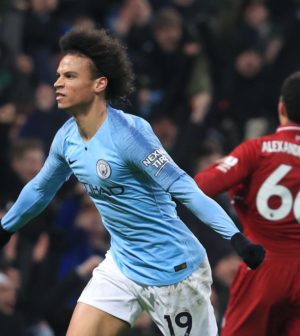 Manchester City ended Liverpool’s unbeaten record to move within four points of the Premier League leaders with a 2-1 win at the Etihad this evening.

Liverpool equalised through Roberto Firmino’s unmarked diving header from close range before Leroy Sané scored the winner 18 minutes from time on the counter-attack.

Ederson 6 – Got away with a blunder from a free kick minutes before Liverpool’s equaliser that the Manchester City goalkeeper didn’t have a chance with. Excellent save to deny Mohamed Salah late on.

Danilo 6 – Beaten by Trent Alexander-Arnold’s cross that set up Liverpool’s equaliser. Andrew Robertson caused the Brazilian problems when bombing forward in the second half.

Vincent Kompany 9 – Picked up a yellow card in the first half for a two-footed tackle on Mohamed Salah. Was assured at the back as Liverpool’s front three saw few opportunities in this game. Important goalline clearance to deny Roberto Firmino just after the hour. Made a number of clearances, particularly in the final 10 minutes before limping off in the final three minutes.

Aymeric Laporte 8 – Moved back into a left-back role this evening and kept Salah very quiet down the wing.

Fernandinho 9 – Excellent in breaking up Liverpool’s possession and looking after the ball himself as Manchester City dominated possession in the first half.

Raheem Sterling 7 – Saw a lot of the ball down the right wing but did very little with it. Raheem Sterling went down inside the penalty area on two occasions. Nice assist for Sané’s winner. Fired wide in the final minute with Alisson scrambling across his goal.

Bernardo Silva 9 – Set up the opener in a busy half for the Portugese midfielder who was involved alot as Manchester City took the game to Liverpool. Worked hard off the ball. Denied by a good save from Alisson in the final minute.

David Silva 5 – Didn’t see as much of the ball as expected as one of the three central midfielders and David Silva was quite sloppy with it too. Got in one good shooting position but saw a tame right-footed effort blocked. Replaced straight after Liverpool equalised.

Leroy Sané 7 – Worked hard off the ball to track back and help out defensively against Mohamed Salah. Had little success going forward against Trent Alexander-Arnold until the final 20 minutes though. Excellent finish for City’s winner after the Liverpool right-back had been dragged inside to free up space for the German. Wasted a good opportunity to set up a chance for Sterling in the final 15 minutes.

Sergio Agüero﻿ 7 – Excellent finish shortly before half-time to give Manchester City the lead in the important fixture. Heavy touch denied Sergio Agüero﻿ an opportunity moments after Liverpool had equalised.

Alisson 8 – Little chance to deny Agüero’s powerful strike even if it was from a tight angle. Excellent save to deny the Argentine one-on-one in the final 10 minutes and later Bernardo Silva. Alisson lost his unbeaten Premier League record at the Etihad this evening.

Trent Alexander-Arnold 7 – A good battle with Leroy Sané at right-back which the 20-year-old came out on top. However, Manchester City’s two goals came from down his side. Was dragged inside by Agüero﻿ for Sané’s winner. Superb cross from deep to set up Liverpool’s equaliser.

Dejan Lovren 5 – Took a yellow card for the team in the first half to deny Sergio Agüero racing through on goal. Then completely lost the Argentine for City’s opener. Dejan Lovren was also far behind his defence to keep Sterling onside in the build up to City’s winner.

Virgil van Dijk 8 – Made endless clearances as Manchester City dominated the first half before taking a 40th minute lead.

Andrew Robertson 7 – Did a good job in preventing Raheem Sterling causing much threat despite the former-Liverpool forward seeing a lot of the ball down the wing, often one-on-one against Andrew Robertson. Knocked Alexander-Arnold’s cross back across goal to set up Firmino for the visitors’ equaliser.

Jordan Henderson 6 – Played a simple passing game in the middle of the pitch and got stuck in with a number of tackles to win the ball back for his side.

James Milner 5 – Didn’t see much of the ball but did win it back a couple of times in a busy first half of defending for James Milner. Replaced by Fabinho 10 minutes into the second half with Liverpool behind.

Georginio Wijnaldum 6 – Saw a bit of the ball and tried creating the odd chance but was unsuccessful.

Mohamed Salah 4 – Saw the fewest touches of any starting outfield player of either side. Mohamed Salah was on the fringes of this game unil being denied by Ederson late on.

Roberto Firmino 7 – Started up front but switched over to the right at times. Saw an effort cleared off the line two minutes before equalising with a diving header on the goalline.

Sadio Mané 6 – Hit the inside of the post early on one-on-one as Ederson closed him down. Surprisingly replaced by Xherdan Shaqiri in the final quarter of an hour with Liverpool trailing 1-2.