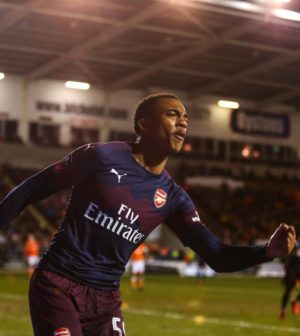 Arsenal had few problems in seeing off League One outfit Blackpool 3-0 at Bloomfield Road this evening.

The Premier League side safely progressed into the fourth round of this season’s FA Cup with the draw taking place on Monday.

Joe Willock found the net twice in the first half for Unai Emery’s side before Alex Iwobi added to the score late on.

Petr Čech 6 – The experienced goalkeeper made an excellent save to deny Armand Gnanduillet early on. Otherwise Petr Čech was well protected by the back four.

Sead Kolašinac 7 – Got forward but not as much as usual playing as part of a back four instead of a wingback. Sead Kolašinac didn’t have too many problems defensively.

Ainsley Maitland-Niles 8 – Another exciting performance down the right wing for the youngster who created a couple of good chances for his teammates in a hardworking effort.

Mohamed Elneny 6 – Tidy if not spectacular in a rare appearance under Unai Emery for the Egyptian who sat in front of the back four today.

Aaron Ramsey 9 – One of the best players on the park, Aaron Ramsey led by example in the middle of the park. Unlucky not to get on the scoresheet with a free kick that struck the post. Assisted Alex Iwobi’s goal.

Joe Willock 9 – Scored a brace and was constantly a nuisance to the Blackpool defence.

Alex Iwobi 6 – Nothing seemed to come off for Alex Iwobi prior to scoring Arsenal’s third goal.

Eddie Nketiah 7 – Missed two good chances at 0-0 but otherwise led the line fairly well up front. Eddie Nketiah’s pace was certainly a problem to the League One side’s defence.

Alexandre Lacazette (28 mins) N/A – Barely got a touch of the ball let-alone a shot despite playing for the final half hour.

Buyako Saka (6 mins) N/A – Another late run out for a teenager.