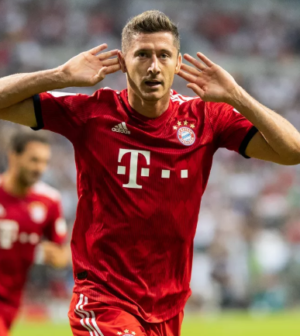 Premier League leaders Liverpool host Bayern Munich in the first leg of their Champions League second round tie at Anfield this evening.

Jürgen Klopp’s side narrowly progressed from their group as runners-up, which included Paris Saint-Germain and Napoli, while the German giants left it late to win their group above Ajax.

Bayern Munich closed the gap to three points on Borussia Dortmund over the weekend with a 3-2 win at FC Augsburg before the leaders were held 0-0 at FC Nürnberg on Monday night.

This is one of the most-anticipated ties of the second round with two of Europe’s giants going head-to-head, including last season’s runners-up.

Liverpool had the weekend off to prepare for this one as they weren’t in FA Cup action but their league form has dipped of late – back-to-back 1-1 draws against Leicester City and West Ham United before they thrashed Bournemouth 3-0 in their last outing on Saturday 9 February.

Last season, Mohamed Salah, Roberto Firmino and Sadio Mané each scored 10+ goals in this tournament and the Reds will be looking to their attacking trio for inspiration in this one.

Defensively, Klopp’s side won’t be at their best this evening as Virgil van Dijk is suspended and both Joe Gomez are Dejan Lovren are injured.

The German football association moved Bayern Munich’s short trip to Augsburg to Friday night to give Niko Kovač’s side more time to prepare for their trip to Merseyside.

After a slow start under their new head coach, Bayern Munich have now won 10 of their last 11 domestically, scoring 27 during that period. However, Manuel Neuer and co have not kept a clean sheet in any of their last five Bundesliga games.

Kovač has a number of absentees to worry about himself. Thomas Müller is suspended for both legs whilst Arjen Robben and Corentin Tolisso are both sidelined currently. Leon Goretzka and Kingsley Coman are both doubts for the trip to Anfield.

Liverpool head into the first leg and the overall tie as favourites and we think this is the correct price. The Reds have an abundance of talent going forward and are top of the most competitive league in the world.

Whilst Bayern Munich have enjoyed beating the likes of Augsburg, VfB Stuttgart and Hannover 96 in recent weeks, they’re not the formidable side they were a couple of years ago. On top of that, they have numerous key midfielders missing for the opening leg.

We’re backing Jürgen Klopp’s side to take a lead to Germany in three weeks’ time and you can get odds of 6/5 on Liverpool to win the first leg with Betfred.

The trio of Mohamed Salah, Roberto Firmino and Sadio Mané should be too much for the German side’s defence, particularly the pace when the two wide men cut inside against Niklas Süle and Mats Hummels, who aren’t the quickest centre-backs in the world to put it politely.

This should be an entertaining tie with lots of goals on the forecast.