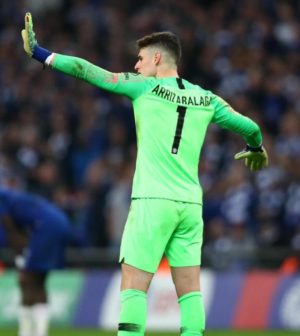 It seems that, with every weekend that goes by, Chelsea are making the headlines for all the wrong reasons. From the outside looking in, and at this moment in time, the West London club looks to be unmanageable after the players at Stamford Bridge plunged the knife deeper into Sarri’s back during the Carabao Cup final

That was just the latest in a string of bizarre occurrences at Stamford Bridge that has taken the spotlight off their rivals. A six-nil drubbing at the Etihad and a lacklustre defeat to Manchester United during the fifth round of the FA Cup has put Sarri and his players right under the national microscope. The clubs around them have been left to get on with their respective campaigns without the glare of the media obstructing the way forward.

Arsenal were in the midst of a mid-season meltdown before the players at Chelsea collectively decided to push the implode button. A defeat to BATE in the Europa League for the Gunners was followed by a loss to City at the Etihad, and they were also dumped out of the FA Cup by Manchester United at home. The knives were out but the mob marching towards the Emirates were distracted along the way by the fiasco at Chelsea.

This has allowed Unai Emery’s team to focus on what is in their control without any outside distractions and, in the blink of an eye, they have qualified for the last 16 of the Europa League and sneaked back into fourth place in the Premier League table.

Once the Gunners surrendered fourth position to Manchester United two weeks ago, there were very few who thought they would reclaim it again this season. However, Champions League qualification now looks within their grasp once again, whether it’ll be on the merit of their league position or success in the Europa League. Indeed, their improved European exploits now find them amongst the favourites to win the competition, with punters now on the lookout for the best football bet of the day featuring Arsenal to triumph outright.

Even Spurs’ surprise defeat to Burnley has, to quite a large extent, gone under the radar thanks to Kepa making sure all the headlines would be about Chelsea over the weekend. The Blues’ players may be intent on seeing their manager hurried out the door but what they probably haven’t realised is that their in-house quarrels have indirectly strengthened the teams closest to them.

It truly is a sorry state of affairs at Stamford Bridge, especially when you consider how close they came to changing the narrative surrounding the club. Only the lottery of a penalty shootout stood between them and beating Manchester City but, somehow, they contrived to let an injured goalkeeper stay on the pitch instead of letting arguably the best shot-stopper in world football come on to see the job through.

Just going 120 minutes of football without conceding was a miracle in itself when you think back to the bloodbath at the Etihad two weeks before. Granted, City were always primed for the season’s first silverware, but it was the margin of victory that had many people speculating. Sarri’s men were agonisingly close to pulling off an upset but chose, at a crucial time, to fall apart rather than rally together.

OFFICIAL: @ChelseaFC have fined Kepa Arrizabalaga The Club one week’s wages for his conduct during the Carabao Cup final.

The money will be donated to the Chelsea Foundation. pic.twitter.com/RLqDKsyiqh

It almost seems as though the Chelsea players are happy to sabotage winning any silverware so that their manager doesn’t hang around any longer than is necessary.

Whilst the turmoil continues to rumble on at Stamford Bridge, their rivals will continue to steal a march on them. There’s no sign of this fiasco ending anytime soon either so it’s perfectly reasonable to think that Chelsea will be singing the blues for the remainder of the season.