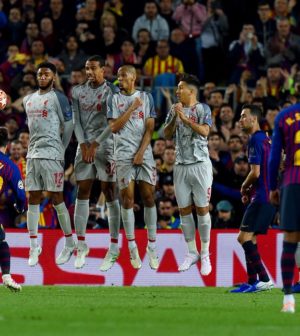 Barcelona have one foot in this season’s UEFA Champions League final after thrashing Liverpool 3-0 at the Camp Nou in the first leg of their semi-final.

The hosts took the lead in the 26th minute when Luis Suárez poked home from close range following an excellent cross from Jordi Alba, whilst Virgil van Dijk had let the former Liverpool hitman go unchallenged.

Liverpool had several opportunities of their own throughout the game – notably Sadio Mané firing over when one-on-one, Roberto Firmino having an effort cleared off the line, and Mohamed Salah hitting the post when Marc-André ter Stegen was down.

Barcelona made the English Premier League side pay in the final quarter-of-an-hour. First, Lionel Messi walked the ball over the line after Luis Suárez had hit the bar. Virgil van Dijk notably left the Argentine superstar do so unchallenged despite the Liverpool centre-back being in a better starting position.

Messi then stepped up to score a sublime free kick from 25 yards in the final 10 minutes. Though the decision to award the free kick was very debatle as Messi ran into Fabinho, who was even booked in the process.

Liverpool have mission impossible to do in the return leg at Anfield on Tuesday.