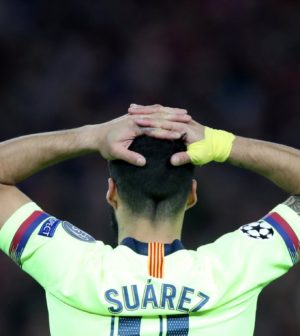 Barcelona forward Luis Suárez has criticised his own team’s defence in their 4-0 humiliation at Liverpool in their UEFA Champions League exit on Tuesday night.

The 2018-19 La Liga champions headed to Anfield with a 3-0 lead from the first leg before Livepool produced one of the greatest comebacks in Champions League history.

Divock Origi and substitute Georginio Wijnaldum scored a brace each as Liverpool upset the odds even without stars Mohamed Salah and Roberto Firmino, both ruled out through injury.

Suárez, who scored just one goal in his 10 Champions League appearances for Barcelona this season, saw only one sight on goal on English soil on Tuesday night – he fired tamely at Alisson in the Liverpool goal.

The controversial Uruguayan has now been quoted as saying that his side’s defence “looked like schoolboys” on Liverpool’s fourth goal. Divock Origi’s winner came via a quick corner frmo Trent Alexander-Arnold.

Suárez has been quoted as saying:

Jordi Alba can take blame for the first goal when his header fell into the path of Sadio Mané in the lead up to Liverpool’s opener inside seven minutes. 2018 World Cup runner-up Ivan Rakitić carelessly conceded possession deep inside his own half which lead to Liverpool’s second.

The winner came while Barcelona were dawdling ahead of a corner, which 20-year-old Alexander-Arnold took quickly, picking out the alert Origi to score.