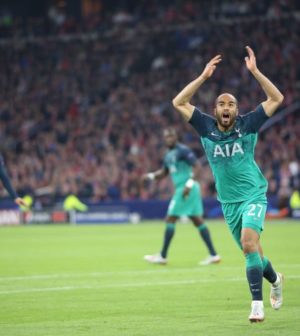 Tottenham Hotspur produced a comeback on par with Liverpool only 24 hours earlier as Mauricio Pochettino’s side came from 0-2 at half-time to win 3-2 at Ajax to progress to next month’s final in Madrid.

The home side were 1-0 winners at the new Tottenham stadium last week before running out to a 2-0 first half lead through Matthijs de Light and Hakim Ziyech.

A Lucas Moura hat-trick in the final 35 minutes pulled off a stunning comeback from the English Premier League side to set up a final against Liverpool on Saturday 1 June in Madrid.

Hugo Lloris 7 – A couple of excellent saves from the Spurs captain, including one in stoppage time less than three minutes before their winner.

Kieran Trippier 4 – Woeful defensively but was involved in Spurs’ equaliser.

Toby Alderweireld 7 – Ajax did have 16 efforts on goal but only four on target. Striker Kasper Dolberg didn’t produce a single shot.

Jan Vertonghen 8 – Could have had a sleepless night with his late miss at 2-2 but Jan Vertonghen was solid defensively in the Dutch capital this evening despite his side conceding two goals.

Danny Rose 5 – A cheeky nutmeg and excellent long ball to help set up the equaliser. Hakim Ziyech had caused Danny Rose problems all night though.

Victor Wanyama 4 – Barely got a foot in nor a touch of the ball before being subbed at half-time as the Ajax midfield overwhelmed Victor Wanyama and co.

Moussa Sissoko 9 – Powerful display in the middle of the park from the French international.

Christian Eriksen 6 – Created a couple of chances from open play but otherwise it was a fairly quiet display from the former Ajax playmaker.

Dele Alli 7 – Didn’t show up in the first half but made key assists for Lucas Moura’s first and third goals.

Lucas Moura 10 – Incredible 35-minute hat-trick. Great burst of pace and left-footed finish for the first, excellent trickery to create space to shoot for the second and beat Matthijs de Ligt to the ball for the third.

Heun-min Son 7 – Hit the post immediately after Ajax took the lead but otherwise Heung-min Son didn’t have his shooting boots on this evening.

Fernando Llorente (45 mins) 6 – Won numerous aerial battles but did miss a sitter from two yards out.