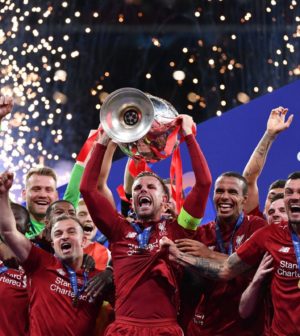 Liverpool have won the UEFA Champions League time for the sixth time in their history with a 2-0 win over fellow English Premier League side Tottenham Hotspur at the Wanda Metropolitano Stadium in Madrid this evening.

Jürgen Klopp’s side were awarded a debatable penalty inside the opening minute of the game which was duly converted by Mohammed Salah.

Tottenham dominated much of the possession and had the ball in good territory but never really caused much threat to Alisson’s goal.

Christian Eriksen saw a free kick saved at a comfortable height towards the end but Harry Kane failed to test the Brazilian goalkeeper all evening.

The Reds wrapped the game up on the counter-attack in the 87th minute through semi-final second leg hero Divock Origi.

This is Klopp’s first success in what was a third European final for him as Liverpool manager. He’d previous lost the Champions League final to Bayern Munich as Borussia Dortmund head coach in 2013 also.

Only Real Madrid (13) and AC Milan (7) have won the prestigious trophy on more occasions than Liverpool now.