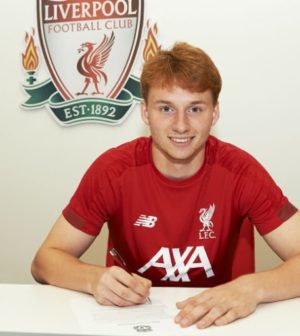 Liverpool have agreed a deal with Dutch Eredivisie outfit PEC Zwolle for the transfer of Sepp van den Berg.

The deal won’t officially go through until 1 July due to international clearance.

The 17-year-old has signed a ‘long-term contract’ with the Reds according to the club’s official website.

Van den Berg broke into the PEC Zwolle first team this past season and is tipped to have a bright future ahead of him. Few would expect the centre-back to start many, if any, Premier League games next season.

The teenager is quoted on the club’s website as saying:

“It is, for me, the biggest club in the world and it’s a dream come true. I am really excited.

“I’ve seen what kind of players from the Academy grew into the first team here. It is unbelievable, especially when this kind of big club does that.

“I think this is the best place for me to grow and hopefully play a lot of games here.”

Sepp van den Berg stands at 6’2″ and made 15 appearances (10 starts) in the Eredivisie this past season, making his debut back in August when he was just 16 years old.

He is also an international for the Netherlands at under-19 level, winning four caps to date.

Neither club has announced the transfer fee but van den Berg becomes Liverpool’s first transfer since winning the UEFA Champions League at the start of the month.