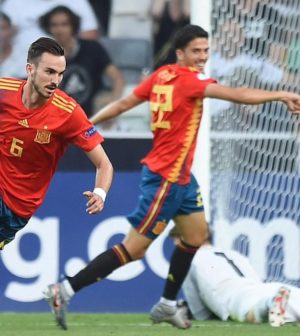 Spain won the 2019 European Under-21 Championship in a rematch of the final from two years ago.

Fabián Ruiz opened the scoring from long-range after seven minutes before Dani Olmo doubled their lead midway through the second half.

Antonio Sivera 6 – Spilled Germany’s first effort on target, which was tame and straight at him in the opening two minutes of the second half.

Martín Aguirregabiria 6 – Lukas Klostermann and Germany did get in behind the Spanish right-back on a number of occasions during the second half.

Jesús Vallejo 9 – Nasty foul in the first half that the captain was lucky to escape with a yellow card and no VAR review. Made an important block five minutes before half-time. Denied Luca Waldschmidt a tap in inside the first two minutes of the second half following Antonio Sivera’s fumble.

Unai Núñez 8 – Headed a number of Germany’s crosses away. Germany had scored 14 goals in their four matches leading up to the final but produced very little in front of goal this evening thanks to Unai Núñez and co.

Junior Firpo 7 – Showed good pace going forward from left-back. Germany’s consolation did come from Junior Firpo’s side but he certainly wasn’t at fault.

Marc Roca 8 – Germany didn’t see too many successful attacks down the centre of midfield. Marc Roca was tidy in possession.

Fabián Ruiz 9 – Cracking strike into the corner from 25 yards as the German defence backed off the Napoli midfielder. Ran the show in the opening 20 minutes and was central to a number of Spain’s attacks.

Dani Olmo 7 – Spain attacked a lot down the right wing early on, but Dani Olmo sometimes found himself outnumbered and little was created down this flank. Rarely threatened to take on Benjamin Henrichs. Moved up front when Mikel Oyarzabal was substituted. Cheeky finish for Spain’s second.

Dani Ceballos 9 – Used the ball well in central midfield for the first 25 minutes. After that, Germany saw more of the possession. Good tight control and strength in the build-up to the second goal.

Pablo Fornals 5 – West Ham United’s new signing rarely got a touch of the ball down the left wing. Replaced shortly after Spain scored their second.

Mikel Oyarzabal 5 – Great first touch pass into the feet of Ruiz to assist Spain’s opener. The striker did occupy the right wing at times but struggled to get into the game. Replaced 10 minutes into the second half.

Carlos Soler (36 mins) 7 – Lively on the counter-attack, creating chances and striking the fame of the goal himself.

Borja Mayoral (20 mins) 7 – Very lively for the final 20 minutes on the counter-attack. Unselfish in front of goal.

Mikel Merino (14 mins) N/A – Late introduction to help see out the game, thuogh Germany did get a consolation.

Alexander Nübel 4 – Wasn’t given a chance with Fabián Ruiz’s opener fine opening goal inside seven minutes. Made a howler to gift Spain their second.

Jonathan Tah 6 – Neither centre-back pressed Fabián Ruiz for Spain’s opener. Germany were pulled apart in the final 20 minutes after the second goal had gone in.

Timo Baumgartl 6 – Made an important block in the opening 15 minutes shortly after Germany had fallen behind. Couldn’t do much about the second nor when Spain were passing themselves in and around the penalty area.

Benjamin Henrichs 7 – Played a couple of nice long-range passes and put a couple of good crosses into the box from the left flank.

Mahmoud Dahoud 7 – The oldest player in the tournament saw a lot of the ball, looked after it well, but didn’t do a whole lot with it.

Maximilian Eggestein 7 – Did some decent work defensively and looked after the ball well in possession.

Suat Serdar 5 – Didn’t make much of an impact in the middle of the park and was replaced on the hour mark.

Levin Öztunalı 5 – Didn’t see too much of the ball but when he did Levin Öztunalı was in good positions. However, little lead to anything.

Luca Waldschmidt 5 – Dropped into the line between Spain’s defence and midfield to collect the ball but the striker’s efforts were mostly from long range. Luca Waldschmidt shot wide from five yards in the final 10 minutes.

Nadiem Amiri 7 – Picked up some good positions down the left flank and created the odd half chance. Scored a cracking, long-range consolation in the final minutes.

Florian Neuhaus (30 mins) N/A – Didn’t see much of the ball and the game was all but after when the second goal went in shortly after Florian Neuhaus was introduced.

Marco Richter (19 mins) N/A – Introduced shortly after Spain scored their second. Marco Richter had made an excellent start to the tournament before it was disrupted by injury.