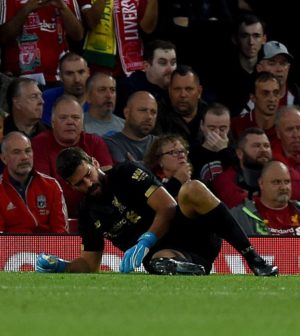 Liverpool goalkeeper Alisson limped off shortly before half-time during the Reds’ comfortable 4-1 victory over Norwich City on Friday night.

The 2019 UEFA Champions League and Copa América winner was replaced by Adrián in the 40th minute with Liverpool 3-0 ahead at the time.

Teemu Pukki gave theSpanish goalkeeper no chance with the Canaries’ consolation goal shortly after the hour. The former West Ham United shot stopper had little else to do for the rest of the game.

Klopp confirmed that the 26-year-old had suffered a calf injury and that he will not take part in the UEFA Super Cup in Turkey against Chelsea on Wednesday.

“There is actually nothing bad to say about the game apart from Ali’s injury. That is, of course, not good for us, but we have to see how serious it is and then we have to deal with it.

“It’s the calf and that’s it. He couldn’t carry on, that’s not a good sign. We have to see.

“Wednesday [in the Super Cup], he will not play – with all my experience, I can say that already. He is injured, for sure, so we have to see how much.”

Liverpool fans will now be keen to hear if the 2018-19 Premier League Golden Glove winner will be fit in time for next weekend’s league game away to Southampton.

Otherwise, Liverpool got off to the perfect start to their 2019-20 Premier League campaign, running away with the first half against newly-promoted Norwich City.

Mohamed Salah, Virgil van Dijk and Divock Origi all scored in the first half after last season’s runners-up took a seventh minute lead through a Grant Hanley own goal at Anfield on Friday night.