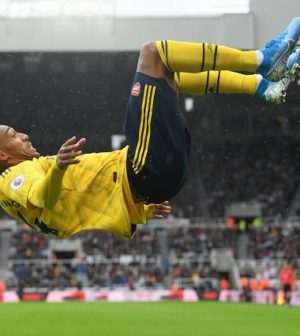 Arsenal started their 2019-20 Premier League campaign with a 1-0 win at St James’ Park against an uninspired Newcastle United.

Pierre Emerick-Aubameyang scored the game’s only goal just before the hour after an excellent assist from Ainsley Maitland-Niles.

Unai Emery didn’t start any of his summer signings but youngsters Reiss Nelson and Joe Willock both starts, whilst Nicolas Pépé, Dani Ceballos and Gabriel Martinelli were all introduced in the second half.

Bernd Leno 7 – Joelinton fired a good opportunity straight at Bernd Leno whilst the German goalkeeper was well protected for the majority of the game.

Ainsley Maitland-Niles 9 – Excellent performance at right-back this afternoon. Ainsley Maitland-Niles made a number of interceptions, including one that led him to providing the cross for the opening goal. The youngster offered width down the right, taking on defnders and winning free kicks.

Calum Chambers 8 – Joelinton looked to threaten early on with a flicked header that went wide and a shot directly at Bernad Leno. Otherwise, the supply to the Brazilian was largely cut off by the Arsenal defence.

Sokratis Papastathopoulos 9 – Aside from giving away one cheap corner it was an assured performance from Sokratis at the back as Newcastle offered little threat.

Nacho Monreal 9 – Javier Manquillo didn’t have much luck going forward down the right for Newcastle whilst Nacho Monreal offered width down the wing for the visitors. The Spaniard was rather cautious in possession in the final third though rather than whopping balls into the box or trying to slide teammates in.

Mattéo Guendouzi 9 – Sat in front of the back four and kept the ball ticking over for the Gunners. Jonjo Shelvey got one long range shot in but there was no creativity at all in the middle of the park for Newcastle.

Granit Xhaka 8 – Made a couple of tackles in the middle of the park and avoided a booking today. Fired a couple of audacious efforts off target too,

Joe Willock 6 – Looked lively early on with a couple of runs from midfield but went quiet afterwards. Won a few free kicks but misplaced a few passes before being replaced just after the hour mark.

Reiss Nelson 7 – Looked exciting on the ball, taking on defenders and creating the odd chance. Made way for Nicolas Pépé in the second half.

Pierre-Emerick Aubameyang 8 – Worked the front line well. A couple of efforts on goal before producing a fine finish for the only goal of the game.

Dani Ceballos (28 mins) N/A – Got away with a misplaced pass outside his own penalty area and didn’t look after the ball all too well given his technical ability and the situation of the game.

Nicolas Pépé (21 mins) N/A – The club’s record signing saw very little of the ball after being introduced for the final 20 minutes.