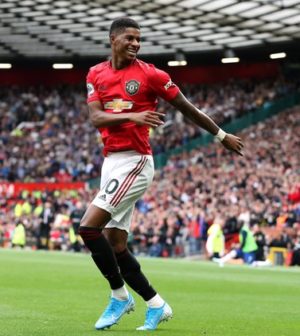 Manchester United handed Frank Lampard a 4-0 thumping in his first game in charge of Chelsea.

Ole Gunnar Solskjaer’s side took the lead on 18 minutes against the run of play after Kurt Zouma clumsily conceded a penalty. Marcus Rashford converted.

Anthony Martial doubled United’s lead midway through the second half before Rashford made it 3-0 only 17 seconds after Chelsea kicked off again.

Daniel James scored the fourth on his Manchester United debut following his move from Swansea City during the summer transfer window.

David de Gea 8 – Not greatly tested. Made a couple of smart saves, including at 4-0 towards the end.

Aaron Wan-Bissaka 8 – Decent defensively on his debut and also offered width going forward. Looked hesitant in putting the ball into the box from out wide though.

Victor Lindelof 8 – Very good as Tammy Abraham was anonymous after the opening 15 minutes. Chelsea were reduced to long-range efforts, mostly from left-back Emerson.

Harry Maguire 10 – Superb debut from the most expensive defender in the world. Harry Maguire was a brick wall in making blocks, headers and clearances to thwart the Chelsea attack time and time again.

Scott McTominay 7 – Sloppy in possession in the first half but was good when the home side sat deep at 1-0 and prevented Chelsea from creating anything.

Andreas Pereira 6 – Good cross for Anthony Martial’s goal but didn’t see a lot of the ball all game.

Jesse Lingard 6 – Tidy in possession but also worked hard off the ball. Started down the right and also played central midfield with Chelsea taking the game to United in the opening 20 minutes of the second half.

Marcus Rashford 9 – Unstoppable penalty to open the scoring and a composed finish for his second. Marcus Rashford also worked hard off the ball when United were defending a 1-0 lead.

Anthony Martial 8 – The French man’s pace hurt Chelsea’s defence and Anthony Martial’s performance was capped off with the goal that sealed the three points.

Daniel James (18 mins) N/A – With the help of a deflection Daniel James scored on his Manchester United debut.

Mason Greenwood (5 mins) N/A – A late run out for the 17-year-old to gain some more first team experience.

Kepa Arrizabalaga 4 – Not given a chance with either of Manchester United’s four goals.

César Azpilicueta 2 – Caught napping for the second and third goals that came in quick succession and killed the game off.

Andreas Christensen 4 – Chelsea’s pace hurt the back four. United’s attack particularly hurt them on the counter-attack in the final 25 minutes.

Kurt Zouma 2 – It was mistake after mistake from the former Everton loanee. Kurt Zouma looked nervous from the beginning with misplaced passes before clumsily conceding the penalty for Manchester United’s opening goal.

Emerson Palmeiri 3 – Was Chelsea’s best attacking threat and Emerson Palmeiri was playing left-back! Hit the underside of the crossbar at 0-1 and forced two saves out of David de Gea.

Jorginho 4 – Conceded possession in his own half a number of times and didn’t protect the back four on the counter-attack.

Mateo Kovačić 4 – Didn’t help out with the defending and played a simple passing game in the final third without trying to open up the United defence.

Pedro 5 – Conceded possession in his own half too many times. Missed an opportunity to create a one-on-one but Pedro did create chances for his teammates and played on both flanks.

Tammy Abraham 4 – Poor at holding the ball up and disappeared after the opening 15 minutes.

Ross Barkley 5 – Interesting choice from Frank Lampard to play Ross Barkley down the left wing. The England international did drift inside though as he wanted to get on the ball.

Christian Pulisic (33 mins) 5 – It was only 0-1 when Christian Pulisic was introduced. The American looked quick and wanted to take players on after making his Premier League debut from the bench.

Olivier Giroud (25 mins) N/A – Had no more luck than Tammy Abraham did up against Harry Maguire.

N’Golo Kanté (18 mins) N/A – The game was over before N’Golo Kanté was given some minutes as he returns from injury.