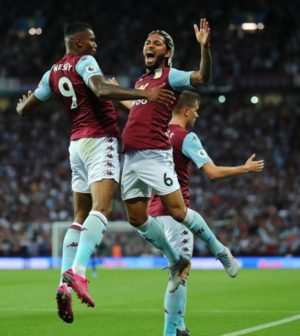 Aston Villa picked up their first points of the season with a 2-0 win against Everton at Villa Park on Friday night.

Wesley scored the first goal after a well-timed run to get on the end of Jota’s through ball.

Tom Heaton 7 – Had nothing to save but catch a couple of crosses.

Frédéric Guilbert 8 – Won the ball back on a number of occasions. Well disciplined after picking up an early yellow card.

Björn Engels 9 – Excellent goalline clearance to deny Dominic Calvert-Lewin in the first half.

Neil Taylor 7 – Theo Walcott had an excellent opportunity late on but Neil Taylor kepy Richarlison in check earlier in the game, though was too narrow at times.

Douglas Luiz 8 – Covered a lot of ground in front of the back four. Kept
Gylfi Sigurðsson quiet all evening.

Jota 8 – Perfectly weighted pass for Wesley’s goal. Jota’s passing from the right wing was very good in the opposition half. Committed a few fouls.

John McGinn 8 – Good work off the ball defensively in helping Aston Villa keep a clean sheet by preventing Everton’s playmakers in the middle from creating anything.

Jack Grealish 8 – Excellent performance in the middle of the park, bringing the ball forward and making some excellent passes in the Everton half.

Trézéguet 6 – Struggled with his first touch a number of times and made a number of wayward passes. Worked hard out of possession though.

Anwar El Ghazi (14 mins) N/A – Was a real threat despite only being on the pitch for a few minutes. Saw an effort deflected narrowly over before wrapping up the game in stoppage time.

Jordan Pickford 6 – Everton were the last team to concede a goal in the 2019-20 Premier League campaign. Jordan Pickford wasn’t given a chance with Wesley’s opener but nutmegged for the second.

Séamus Coleman 6 – One of Everton’s only creative players at Villa Park this evening. Anwar El Ghazi was able to get three shots in on goal after coming on for the final 15 minutes.

Michael Keane 4 – Poor awareness for the first goal, allowing Wesley in one-on-one. Shrugged away from the ball by Wesley in the build up to Vila’s second.

Lucas Digne 6 – Allowed Jota time on the ball to create chances but did put some good deliveries in from set pieces.

Morgan Schneiderlin 8 – Solid in breaking up play in the middle of the park and winning his aerial duels. Picked out teammates with long raking balls

André Gomes 3 – All over the place this evening. Conceding possession and committing clumsy fouls. No idea what he was doing for the second goal.

Richarlison 5 – Failed to create anything in open play and not a threat to Tom Heaton’s goal himself.

Gylfi Sigurðsson 5 – A mixture of underhit and overhit passes from the Icelandic playmaker.

Bernard 5 – Failed to make an impact despite Aston Villa leaving a lot of space down his side in the first half. Replaced on the hour.

Dominic Calvert-Lewin 4 – Missed an excellent opportunity in the first half and offered nothing else before being subbed off on the hour.

Alex Iwobi (30 mins) N/A – Added some energy to the Everton attack but lacked the quality. Unlucky with his effort that came back off the post.

Moise Kean (30 mins) N/A – Barely got a touch of the ball in the half hour he was on the pitch.