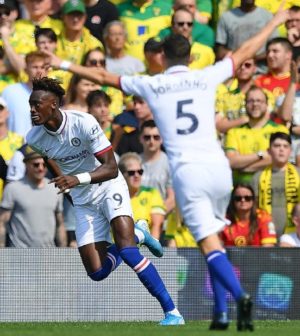 Chelsea won at the third attempt under manager Frank Lampard after the Blues pulled off a 3-2 victory at Norwich City on Saturday lunchtime.

Many believed Carrow Road would be a tricky trip for a Chelsea side who were hammered 4-0 at Manchester United and then held 1-1 at home by Leicester City to start the 2019-20 Premier League season.

Few expected Chelsea to compete for a top four finish this season but a brace from Tammy Abraham either side of Mason Mount’s strike give the West London club something to build on.

In a thrilling first half, Tammy Abraham opened the scoring for the visitors after only three minutes before youngster Todd Cantwell quickly equalised for Norwich.

Mason Mount made it two goals in two games for the Blues after only 17 minutes before Teemu Pukki scored his fifth goal in only the third game of the season for the Canaries on half hour.

The goals dried up for a while after before Abraham came up with the winning strike midway through the second half.

The former England under-21 international had fired blanks in his first two Premier League games for Chelsea but continues to be trusted by his post and repaid Frank Lampard in full this afternoon.

Chelsea will be looking to make it back-to-back wins when they host newly-promoted Sheffield United before the international break next weekend, whilst Norwich have the same number of points as the five time champions of England, after three games.