Man Utd remain winless in 3 after draw at Southampton 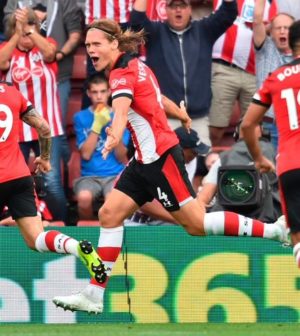 Manchester United were held to a disappointing 1-1 draw at 10-man Southampton on Saturday lunchtime as Ole Gunnar Solskjær’s side produced another disappointing performance.

The Red Devils had started the season with an emphatic 4-0 thrashing of Chelsea before being held 1-1 at Wolverhampton Wanderers and suffering a shock 2-1 loss at home to Crystal Palace last weekend.

Like Palace, Southampton were many people’s candidates for relegation heading into the season, but four points from their last two games will have changed a few people’s minds.

United had looked on course for three points when Daniel James scored his third goal of the season after only 10 minutes. The summer signing from Swansea City is turning out to be one of Solskjær’s most important players right now.

The visitors failed to capitalise on their lead and were pegged back on the hour following some poor marking at a set piece. With the ball not fully cleared, United failed to regroup inside the penalty area as tall defender Jannik Vestergaard was given a free header from close range to make it 1-1.

Inexperienced left-back Kevin Danso was shown his second yellow card in the final 20 minutes for the Saints but United failed to take advantage of the extra man and had to settle for a point.

The result means United have collected five points from their opening four games, leaving them four points behind leaders Liverpool already, with the Reds still to play Burnley later on Saturday.