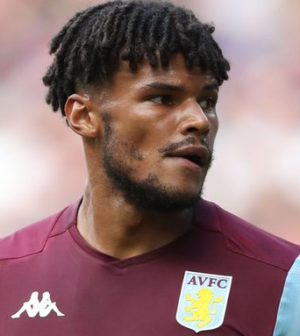 Some players are born great, others have greatness thrust upon them. Then there is Tyrone Mings…

His story is one of triumph over setbacks on and off the field, involving a seven-year journey from non-league football (and an insurance broker’s office) to the bright lights of Wembley, and a call-up for England.

Until now, the fates have been very much against Mings, even contriving to make him and his family homeless while he was still of primary school age. Perhaps for the best, Mings recalls little of the bad relationship endured by his mother at the hands of a man in Chippenham, and when his mother was forced to leave, a homeless shelter was the only option.

However, Mings remembers well the dingy surroundings of the shelter. He also vividly recalls the grimy communal facilities, the hostility encountered from a myriad of vagrants, and the cramped conditions of the spartan bedroom, which was shared with his mother and sisters.

A move into social housing would represent only a small improvement in the quality of Mings’ life, and his rise through the Southampton academy – after joining at the age of eight in 2001 – was an escape that almost made his family’s struggles worthwhile. However, he was released in 2009, leaving him without a club, and apparently without a hope.

Failed trials at Cardiff City, Swindon Town, Portsmouth and Bristol Rovers would follow, surely leading Mings to contemplate quitting football for the first time. However, football is not so easily given up by one as passionate as Mings, and his skill won him a scholarship for a place at Millfield school.

Patience Tested to the Limit

Those that bet on football can see Mings’ current club are among the favourites for relegation. As such, Mings will need to draw upon his prior experience of non-league football’s boisterous nature, and blend that with his Premier League-quality skill in defence.

Non-league football is how Mings started out, and after graduation from Millfield, his first port of call was Yate Town, before he later moved to Chippenham Town.

Mings was a standout performer for these clubs, but he was leagues ahead of his peers, and would once more become disenfranchised with football. That stood to reason, as half of Mings was still tethered by a strand to the world of football. Meanwhile, the other was planted firmly in the world of mortals, where he existed as a part-time bartender and a mortgage advisor.

With its distinctive ladder, the latter career path is often a clear one. In an inversion of Robert Frost’s most widely-quoted line, it is a road well-taken, and one which promises a stability that is very tempting to a man that has endured setbacks so early in life.

But Mings’ intuition knew better, all along.

The only ladder that interested Mings was the Football League system, and thanks to the recommendation of former Ipswich Town defender Russell Osman, Mings was granted one final chance to break into the big-time in late 2012. The now-hulking defender had a trial with Ipswich Town, and passed with flying colours, with Mings notably berating veteran Danny Higginbotham for an error.

Mings’ bravery paid off on that occasion, and he was in. Overnight, he went from playing in front of no more than dozens at Chippenham to a 30,000-strong Portman Road. At least, that was the case once Aaron Cresswell had transferred to West Ham – a whole year and a half after Mings was accepted into the Tractor Boys’ fold.

Frustratingly, prior to the start of the 2014/15 season, Mings had made only a handful of first-team appearances for Ipswich. However, he would appear in all but six of Ipswich’s league games in 2014/15, doing much to hold the defence together, with an excellent autumn and winter eventually leading to a sixth-place finish.

A return to the Premier League was not forthcoming for the Suffolk outfit, but Mings would be spared another slog in the Championship. In the summer of 2015, a club-record £8m deal saw him join Eddie Howe’s AFC Bournemouth side, who had recently scooped the Championship title against all odds.

In many respects, Bournemouth was the perfect club to give him his first taste of Premier League action. It was common knowledge that Bournemouth needed the muscle to stay up, and this ensured that Mings was guaranteed consistent first team football – and he was… for all of six minutes.

Just as Mings’ life looked to be turning a corner, his knee was obliterated during a match against Leicester City in August 2015, very shortly after coming on as a sub. Later scans revealed that an absence of at least nine months would be forthcoming, with the long-term prognosis also unclear.

He did not play at all for the entirety of 2016, and soon fell into depression, isolating himself and doing nothing to aid the healing of his injury. A less-humane manager may well have shipped him out, but Eddie Howe kept the faith that drove him to first pursue Mings, and inspired him to persevere.

Mings returned to action in January 2017, but just eight months later, a back injury scuppered him once again. With Bournemouth now an established Premier League club, a six-month absence proved too much this time. Through no fault of his own, Mings was largely out of the first team picture by the end of 2017/18, and once more on the verge of trying to find another club.

Villa Loan – and Happily Ever After?

At this time, Aston Villa collectively had a similar sense of heartbreak to Mings, having ended 2017/18 by losing to Fulham in the Championship playoff final. With just one year of parachute payments remaining, after the club’s Premier League relegation of 2015/16, the pressure was firmly on.

That pressure showed, with Villa lying tenth in the Championship table come the final day of the January 2019 transfer window. There was little to suggest that any upturn was forthcoming, and Villa needed a reliable saviour to seal up the defence.

That person would also need to give some forward momentum from the wide areas, which were always a significant strength for Villa under the right conditions. Mings fitted the bill perfectly, and his loan to Villa was sealed with very little time left before the deadline.

With Villa taking just two points from the first twelve available after that window, Mings’ impact was not instantaneous. However, his arrival did eventually correlate with a dramatic improvement in Villa’s form. An emphatic run of ten consecutive league wins (between 2 March and 22 April) thrust Villa firmly into the playoff zone, and there they stayed.

Armed with some capable strikers, semi-final opponents West Bromwich Albion represented tough opposition, but Mings played his part in a defence that withstood the Baggies’ charge, and sealed progression to a victorious playoff final at Wembley by the meanest of margins.

So far in this Premier League campaign, the now-permanently signed Mings has translated his Villa form of the spring into the new season. Though Villa went into the international break with three defeats from their opening four games, that return does not tell the whole story of Villa’s Premier League rebirth. Indeed, Villa held out for a long time on a 1-0 lead at Tottenham on day one, before eventually cracking under the pressure.

While Villa’s 2-1 defeat to Bournemouth in week two was a day to forget, Mings was colossal in the victory over Everton six days later, rendering the Toffees’ prime threats Gylfi Sigurdsson, Bernard and Richarlison utterly impotent. Then there was the dreadful officiating error that denied Villa a much-deserved point at Selhurst Park. That result was a terrible blow, but Villa have the character to recover, especially with Mings at the back.

With Mings having previously played in the wide and central areas of defence, his versatility is a huge asset to Villa moving forward. As long as the Bath-born battler remains injury-free, he will be a cornerstone of Villa’s survival if it is attained. Future international duties, in advance of Euro 2020, can only aid his belated start to life, finally, at the very pinnacle of the beautiful game.