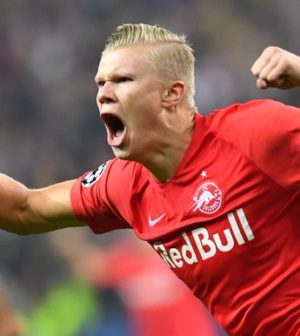 RB Salzburg forward Erling Braut Håland has complimented Ole Gunnar Solskjær for the contribution he made to his development, both as a player and a person. This comes amid talk of a potential move to Manchester United next season.

Håland is regarded as being among European football’s most promising prospects this season, scoring an incredible 17 goals in 10 goals in all competitions. The odds of him keeping up that pace might be quite slim at this stage- certainly, better odds are available online with a choice of slot games to play (that are also often more fun). But for those who don’t limit their betting to football only, it might be a worth a go if you like long odds with high potential. After all, the 19-year-old wonderkid made himself known on football’s biggest stage on September 17 when he fired a hat-trick in Salzburg’s 6-2 UEFA Champions League drubbing over Belgium champions Genk. So he clearly has a few tricks up his sleeve.

Scouts from some of the continent’s biggest clubs were reportedly at that match to see Håland’s performance for themselves. One of those clubs was Manchester United, who have had their eye on the player for a while. A reported 50 scouts saw Håland become one of the youngest-ever players to secure a hat-trick in the competition.

The Norwegian international was coached by Solskjær when the Manchester United manager was in charge of Molde, and now Solskjær is now expected to bring Håland to Old Trafford. Håland heaped praise upon his one-time boss for the effect that he had on both his personal and professional life. He also spoke highly on Solskjær as a player, citing his 1999 Champions League win with United. He added that he has always dreamed of playing for the world’s greatest clubs and that he particularity admires English football.

The player’s father Alf-Inge Håland played for rivals Manchester City in the noughties, but said that he would like for United to make their interest in his son formal. Håland was born in Leeds, another team his father played for. Maybe one day, the younger Håland could follow his father’s footsteps and return to his hometown as a player for the Whites.

United have a shortage of options when it comes to strikers, with only Mason Greenwood, Anthony Martial, and Marcus Rashford to call upon through the middle. Solskjær offloaded Alexis Sánchez and Romelu Lakaku in the simmer, intending to give the younger players a chance to step up. However United have scored just nine goals in their first eight Premier League matches of the season, falling 15 points behind leaders Liverpool. If the United boss continues his current approach, Håland could well be a realistic option to come to Old Trafford.

United are reportedly concerned that super-agent Mino Raiola could prevent a move for the player, with the transfer saga over Paul Pogba being a potential issue. Håland is advised by Raiola, who is continuing his attempts to orchestrate a change of scenery for Pogba. As United have thus far refused to let Pogba leave, they are worried that the agent could put an end to talks with Håland.