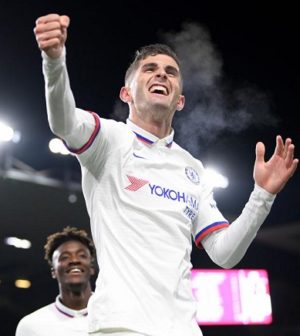 Chelsea made it four successive away Premier League victories to move back level on points with Leicester City in third spot in the table.

Christian Pulisic introduced himself to the fans with not only his first goal for the Blues, but a hat-trick as Chelsea raced into a 4-0 lead before conceding two late consolation goals.

Burnley were at fault for the first two goals in gifting possession to the visitors inside their own half, whilst Sean Dyche’s side offered very little threat on Kepa’s goal until the game was over.

Kepa Arrizabalaga 6 – Not given much of a chance with Jay Rodriguez’s strike out of nowhere, whilst Kepa was deceived by the wicked deflection on the second goal.

César Azpilicueta 8 – Kept Dwight McNeil quiet when he was down the left, won the ball back a number of times and pushed forward from right-back, although didn’t put any crosses into the box.

Kurt Zouma 7 – One sloppy pass to concede possession in Chelsea’s own half but otherwise Kurt Zouma largely had the Burnley attack under control.

Fikayo Tomori 8 – Made an excellent tackle and interception to deny Burnley chances and was unfortunate for deflecting McNeil’s shot past Kepa.

Marcos Alonso 8 – Solid game before coming off after an hour. Marcos Alonso kept Jeff Hendrick quiet down the wing and put a few crosses of his own into the opposition’s penalty area.

Mateo Kovačić 7 – Covered a lot of ground in the middle of the park, getting stuck into challenges and dribbling the ball forward to start attacks for the Blues.

Jorginho 8 – Filled in for either centre-backs at times when Burnley tried countering Chelsea corners and completed a high percentage of his passes as he does.

Willian 9 – Caused Erik Pieters a lot of problems down the right wing. Willian scored a powerful effort and forced a couple of saves out of Nick Pope, as well as setting up one of Christian Pulisic’s goals.

Mason Mount 8 – Wanted the ball a lot and received it in some decent positions. Mason Mount may be disappointed not to be among the goalscorers but did setup a goal in another influential performance from the young Englishman.

Christian Pulisic 10 – A scintillating game from the USA captain who single-handedly won the three points for Chelsea in the first half with two solo efforts to give them a 2-0 lead, before heading in the third shortly after the break. The Burnley defence had no answer to Christian Pulisic.

Tammy Abraham 6 – The Chelsea and England striker didn’t see too much of the ball and didn’t test Nick Pope once before being replaced. Did set up one of the goals though.

Reece James (29 mins) 7 – Came on and immediately made two shots to prevent Burnley from reducing the score shortly after the hour mark. Impressive performance from the teenager who is fully fit again and can expect more game time in the coming weeks.

Olivier Giroud (22 mins) N/A – A rare run out for the French striker but didn’t do anything of note.

Callum Hudson-Odoi (20 mins) 6 – Was eager to make an impact when coming on. Tested the Burnley goalkeeper and was booked for a dive inside the penalty area.