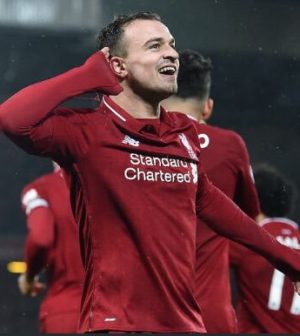 Liverpool host Watford at Anfield in Saturday’s lunchtime kickoff in what will be their final their final Premier League game until Boxing Day due to their participation in the FIFA Club World Cup later this week.

Jürgen Klopp’s league leaders are widely-expected to cruise to victory against bottom of the league Watford, who have won just won of their opening 16 fixtures.

The Reds boss has been shuffling his side a little in recent weeks due to the fixture congestion and there are a couple of changes to his side again today.

James Milner comes in at left-back. The experienced campaigner is a very different option to the regular Andrew Robertson, particularly given that he is right-footed.

There’s another start for Xherdan Shaqiri in the middle of the park, but no changes to the front three. Teenager Rhys Williams is among the substitutes, that also includes Adam Lallana, Alex Oxlade-Chamberlain, and Divock Origi, all looking for a run out.

Nigel Pearson appears to have named Adrian Mariappa as the right-back, so expect Sadio Mané to have a big game down that side.

Troy Deeney may be marked out of the game by Virgil van Dijk, so any hope the visitors have of scoring a consolation goal may come from Gerard Deulofeu or Abdoulaye Doucouré.