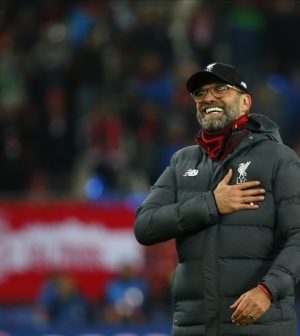 Liverpool manager Jürgen Klopp has signed a new contract at Anfield that will run until 2024, the club have confirmed.

The German manager joined the Merseyside club in October 2015 and had previously signed a six-year deal back in July 2016. It has now been extended by a further two years.

Klopp won his first trophy with Liverpool last season when he guided them to the 2019 UEFA Champions League, beating Tottenham Hotspur 2-0 in the final in Madrid.

Heading into the busy Christmas scheduled, Liverpool have an eight-point lead over second place Leicester City, and are 14 points ahead of defending champions Manchester City, after 16 games.

Klopp’s side host Watford in tomorrow’s Premier League lunchtime kickoff, then face Aston Villa in the EFL Cup on Tuesday before their FIFA World Club Cup semi-final the following day.

They return to Premier League action on Boxing Day, to face Leicester City at the King Power Stadium.

As per Jürgen Klopp’s video message on the official Liverpool website, the manager said:

“This club is in such a good place, I couldn’t contemplate leaving.

“For me personally this is a statement of intent, one which is built on my knowledge of what we as a partnership have achieved so far and what is still there for us to achieve.

“When I see the development of the club and the collaborative work that continues to take place, I feel my contribution can only grow.

“People see what happens on the pitch as a measure of our progress and although it is the best measure, it’s not the only measure. I have seen the commitment from ownership through to every aspect and function of the club you can think of.

“When the call came in autumn 2015, I felt we were perfect for each other; if anything, now I feel I underestimated that.

“It is only with a total belief that the collaboration remains totally complementary on both sides that I am able to make this commitment to 2024.

Liverpool have won 15 of their opening 16 Premier League games to start the 2019-20 campaign, dropping points only in a 1-1 draw against Manchester United at Old Trafford.

Last season, they lost just one game as they missed out on the title to a sole point to Manchester City. They have not been champions of England in the Premier League era, winning their 18th Division One championship back in 1990.

Liverpool have also progressed through to the knockout stages of this season’s Champions League and will find out their second round opponents on Monday.