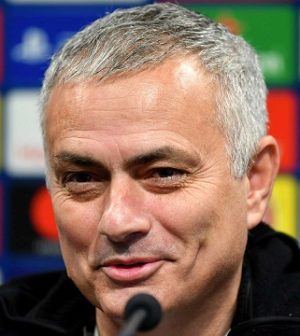 Tottenham Hotspur manager José Mourinho is confident that his new side will finish in the top four come May.

The former Manchester United boss only took charge on 20 November, winning three of his first four Premier League games in charge (L1) as he’s closed the gap on the top four.

Spurs start the weekend in 7th place, six points behind Chelsea in fourth after 16 games. Mourinho had taken over from Mauricio Pochettino when they were down in 14th.

Tottenham finished runners-up in last season’s Champions League final and have reached the second round of this season’s competition, where they will find out their next opponents in Monday’s draw.

José Mourinho is also confident that his side will qualify for next season’s competition via the league.

Speaking at his pre-match press conference ahead of Sunday’s trip to Wolverhampton Wanderers, the Spurs boss said:

“We know where we belong and we believe at the end of the season we are going to be there.

“We don’t belong to the second part of the table where we were. We don’t even belong to position seven or eight, where we are in this moment.”

Chelsea are widely-expected to pick up three points on Saturday when they entertain Bournemouth at Stamford Bridge.

However, Frank Lampard’s side have lost three of their last four (W1) in the Premier League.

Tottenham Hotspur host Chelsea next Sunday at their new stadium in which will be a huge showdown before former manager and player.