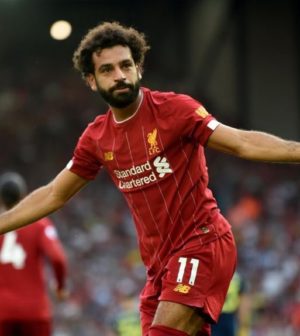 Liverpool had to dig deep and work hard to earn a 2-0 victory at home to Watford in Saturday’s lunchtime Premier League game.

Mohamed Salah scored right-footed efforts in each half as the visitors missed several good opportunities in between.

Sadio Mané had a goal ruled out by VAR early in the second half.

Alisson 8 – The Liverpool goalkeeper was forced into a couple of saves, but Watford really should have been able to beat the Brazilian with some of the positions they got in. Denied Gerard Deulofeu one-on-one.

Trent Alexander-Arnold 5 – Sloppy performance from the right-back this afternoon as Watford had a lot of success down this side.

Virgil van Dijk 6 – Cool as usual at times, but Ismaila Sarr did get the better of the Dutch centre-back at times. Virgil van Dijk’s misplaced passback beat Alisson in the second half but rolled out for a corner fortunately.

James Milner 6 – Didn’t offer many crosses or threats from the left wing as Andrew Robertson usually does, and often cut inside. Moved into a central role for the final half hour. Decent at times.

Jordan Henderson 5 – Got overran by the Watford midfield who had a lot more possession and attacks than was expected coming into the game.

Xherdan Shaqiri 5 – Offered little before being replaced just after the hour.

Mohamed Salah 9 – Two sublime finishes. The second should be a contender for the goal of the month. Mohamed Salah’s movement was a constant threat to the Watford backline.

Roberto Firmino 5 – The Brazilian forward was off the pace today as he rarely got in goalscoring positions and didn’t link up with Salah and Mané as well in attack as Roberto Firmino usually does.

Sadio Mané 7 – Was a threat at times to the visitors’ defence and had a goal ruled out by VAR for being offside by a fraction shortly after the half-time break.

Divock Origi (3 mins) N/A – Late introduction and Liverpool added their second moments later after a mishit from Divock Origi fell into the path of Salah.