From D.C. to Derby: Wayne Rooney’s return to English football 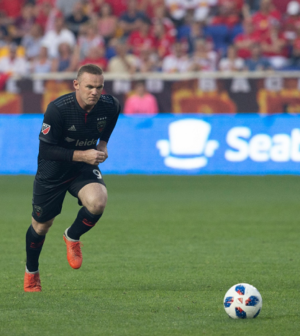 Washington D.C. has a distinctly humid, turgid atmosphere in the summer time – the months in which the MLS season reaches full flow. The air hangs hot and heavy, thick enough that you could almost scoop it up with a spoon, while a general stickiness pervades by way of the intense humidity. The Potomac River drags by slow and languid, it too seemingly overcome by the density of the atmosphere, pining for the sweet chill of winter.

It was almost too easy to draw parallels between the city’s dense, bloated climate and the sallow, distended career of Wayne Rooney when the former England striker arrived in Washington in 2018, having completed a transfer to D.C. United. Then 32, Rooney’s previous few years in the Premier League were defined by a lack of direction and purpose in his play. He was shunted into various different positions all over the pitch at Manchester United and Everton, as his managers vainly clung on to the last lingering vestige of Rooney’s once great talent.

With age he had lost the explosiveness that captured the nation when he first burst onto the scene in the Premier League and took Euro 2004 by storm. While Rooney remained a uniquely gifted footballing visionary, with an unrivalled eye for a pass, the barnstorming qualities that made him such an unstoppable striker for so many years had gradually abandoned the Englishman, leaving a husk of a player attempting to salvage the broken remnants of his career.

The move to D.C. represented a new beginning, a chance for Rooney to leave behind the intense media spotlight thrust upon him day after day in England and simply play football with no strings attached, while enjoying the forgotten delight of spending time with his family in public.

By all accounts, Rooney had a fine time in the US. Despite the dense, sticky Washington climate, he hadn’t looked so full of vim and vigour in many a year. In two seasons at D.C. United he made 52 appearances, scored 25 goals and contributed 14 assists – an impressive return by anyone’s reckoning. Rooney had been given a new lease of life at the MLS club, a fact demonstrated by one remarkable assist in a 3-2 win over Orlando City in August 2018.

Since life was going so well for Rooney in the States, his decision to return to English football took a lot of people by surprise. In August it was announced that Rooney had signed for Derby County as a player-coach, and would join up with the team in January after the MLS season had concluded. The news sent shockwaves through the footballing world, and was a major boost for Derby after the departure of manager Frank Lampard that summer.

Now that January has arrived, Rooney’s Derby career has begun in earnest. Already you can see the renewed vitality in his game – his love of football reignited by a spell away from the cauldron that is the Premier League. Rooney was instrumental in Derby’s recent 1-0 FA Cup win away at Crystal Palace, dictating play from a deep midfield position, demonstrating the masterly touch and vision he has always possessed. The club are currently languishing in the bottom half of the Championship table, often unfancied in English Championship betting odds, but the arrival of Rooney could spark an upturn in form.

There is perhaps a sense that Rooney feels he has something to prove in England before he retires. He faced plenty of criticism in his last couple of seasons at Manchester United, and in his season back at Everton before moving to the MLS. Perhaps his revitalised form during his spell in America has proven to himself that he still has the qualities required to make a difference in the English game.

It’s clear that this is the autumn of Rooney’s career – the wrapping up and winding down. But his return to England proves that the fire in his belly is not quite extinguished yet, that the fierce determination and will to win that defined his best years in the Premier League still burns inside him.

This is the new Rooney – the more measured, disciplined Rooney aware of both his strengths and his shortcomings at this late stage of his career. But there is just enough of the old spark left within him to make his move to the Championship an engrossing footballing story, with one of the game’s biggest, boldest performers as its chief protagonist.