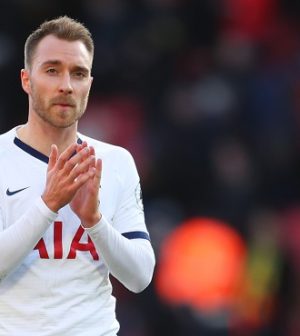 Internazionale have completed the signing of Christian Eriksen from Tottenham Hotspur, the Premier League side have confirmed.

The Dane’s departure from North London this month was just a matter of time and to which club.

Whilst Eriksen had previously been strongly linked with a move to Real Madrid, Inter had become the favourites in recent weeks.

The 27-year-old had been upset at Tottenham’s refusal to sell him over the summer. He subsequently fell out with then manager Mauricio Pochettino, limiting his playing time as a result.

Eriksen had been a regular in the starting lineup ever since his arrival from Ajax in 2013, but made just 10 starts in 24 Premier League games this season.

Several media outlets, including the BBC, are reporting that Inter Milan have landed the playmaker in a £17 million deal.

This will be seen as a fantastic deal from the Italian side, who have also loaned Romelu Lukaku, Alexis Sánchez and Ashley Young from Manchester United this season.

Antonio Conte’s side have been putting up a title challenge to Juventus this season, but have fallen three points behind the defending champions, having drawn five of their last seven league games.

Christian Eriksen could make his debut for I Nerazzurri as early as tomorrow’s Coppa Italia match against Fiorentina, or in Sunday evening’s Serie A clash at Udinese.

Spurs have already replaced the attacking midfielder by confirming Giovani Lo Celso’s deal has been made permanent. The Argentine international had been on loan from Real Betis.

Lo Celso have signed a five-and-a-half year deal with last season’s Champions League finalists. He’s made just four Premier League starts since joining over the summer and has not been involved in a single goal in 524 minutes. He has scored in both the Champions League and FA Cup however.