﻿How Wolves could end weekend in 5th 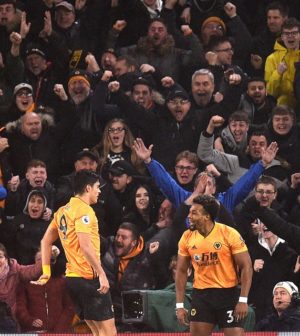 Wolverhampton Wanderers are showing last season wasn’t a fluke when they finished seventh in the first season back in the Premier League.

Nuno’s side are in that position after 24 games this season but only behind fifth place Manchester United on goal difference.

What’s more, the West Midlands club are doing this whilst also competing in the UEFA Europa League, where they will restart their campaign in the second round next month.

Wolves are set to take on Espanyol in the next round, with the Spanish club currently propping up La Liga with just 15 points from 21 games.

Before that, Wolves are heading to Manchester United in the Premier League this weekend. This gives Nuno’s side the chance to leapfrog their opponents into fifth position come the end of play on Saturday and maybe even the weekend.

The team currently sitting in between Wolves and United is Tottenham Hotspur – whom host in-form Manchester City on Sunday.

A win at Old Trafford certainly isn’t out of the question for Wolves. Although they were eliminated from the FA Cup by Manchester United this season, they had been unbeaten in their previous five matches head-to-head.

Four of those matches have come at Molineux though, including the 0-0 draw in the FA Cup at the start of January and the 1-1 in the Premier League back in August.

Wolves were beaten late on against Liverpool in their last Premier League outing but many felt that was a harsh result given their performance. Prior to that, they had won at Southampton.

Meanwhile, Ole Gunnar Solskjaer’s side have been beaten comfortably in their last two Premier League outings – 2-0 away to Liverpool and 2-0 at home by Burnley. The Clarets have lost four of their previous five before heading to Old Trafford.

Manchester United will also be without top scorer Marcus Rashford for a number of weeks yet. In his place, Anthony Martial has been starting up front. Whilst the aforementioned duo team up well when they’re on the pitch together, they’ve not fared too well individually. In fact, the French forward isn’t in the best of form of late either – just one goal in his four Premier League starts in 2020 and that came during a 4-0 thrashing of Norwich City. He has no assists during this run either.

Neither side are too strong defensively either – both sides with just four clean sheets in 24 Premier League matches each this season.

Adama Traore is in fine form down the right wing for Wolves and could really have the beating of Brandon Williams if the youngster starts this one. Don’t be surprised if Solskjaer plays a back four with Luke Shaw at left-back though.

The former Barcelona youth has been supplying Raul Jimenez this season and the Mexican striker has been a real threat to defences. Nuno’s side also have goalscorers in Diogo Jota, Neto and Ruben Neves.

I would not be surprised to see Wolves pick up three points away to Manchester United this weekend.