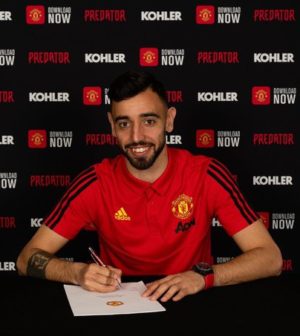 Manchester United have completed the signing of Portuguese superstar Bruno Fernandes from Sporting Club of Portugal, the club have confirmed.

United had been linked to the attacking midfielder for several months and it will come as a relief to fans that they were able to complete the deal.

Bruno Fernandes scored 63 goals and provided 52 assists in 137 games in all competitions over two-and-a-half years for Sporting CP. He has scored twice in 19 internationals for the Portuguese national team.

As the stats suggest, Bruno is both a goalscorer and playmaker in his number 10 role. He had scored eight goals and provided seven assists in 17 appearances in this season’s Portuguese Primeira Liga before completing his move to England on Thursday. He also had five goals and three assists in his five Europa League starts this season for Lisbon’s second club.

Manchester United have landed a real star here but he now has to prove himself at the top level. He previously had spells at Udinese and Sampdoria in Italy before the latter allowed him to move back home in 2017.

Bruno Fernandes could make his debut for the Red Devils as early as this Saturday when they host Wolverhampton Wanderers at Old Trafford in the evening Premier League game.